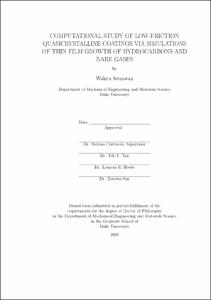 View / Download
2.1 Mb
Date
Author
Setyawan, Wahyu
Advisor
Curtarolo, Stefano
Repository Usage Stats
368
views
622
downloads
Abstract
Quasicrystalline compounds (QC) have been shown to have lower friction compared to other structures of the same constituents. The abscence of structural interlocking when two QC surfaces slide against one another yields the low friction. To use QC as low-friction coatings in combustion engines where hydrocarbon-based oil lubricant is commonly used, knowledge of how a film of lubricant forms on the coating is required. Any adsorbed films having non-quasicrystalline structure will reduce the self-lubricity of the coatings. In this manuscript, we report the results of simulations on thin films growth of selected hydrocarbons and rare gases on a decagonal Al$_{73}$Ni$_{10}$Co$_{17}$ quasicrystal (d-AlNiCo). Grand canonical Monte Carlo method is used to perform the simulations. We develop a set of classical interatomic many-body potentials which are based on the embedded-atom method to study the adsorption processes for hydrocarbons. Methane, propane, hexane, octane, and benzene are simulated and show complete wetting and layered films. Methane monolayer forms a pentagonal order commensurate with the d-AlNiCo. Propane forms disordered monolayer. Hexane and octane adsorb in a close-packed manner consistent with their bulk structure. The results of hexane and octane are expected to represent those of longer alkanes which constitute typical lubricants. Benzene monolayer has pentagonal order at low temperatures which transforms into triangular lattice at high temperatures. The effects of size mismatch and relative strength of the competing interactions (adsorbate-substrate and between adsorbates) on the film growth and structure are systematically studied using rare gases with Lennard-Jones pair potentials. It is found that the relative strength of the interactions determines the growth mode, while the structure of the film is affected mostly by the size mismatch between adsorbate and substrate's characteristic length. On d-AlNiCo, xenon monolayer undergoes a first-order structural transition from quasiperiodic pentagonal to periodic triangular. Smaller gases such as Ne, Ar, Kr do not show such transition. A simple rule is proposed to predict the existence of the transition which will be useful in the search of the appropriate quasicrystalline coatings for certain oil lubricants. Another part of this thesis is the calculation of phase diagram of Fe-Mo-C system under pressure for studying the effects of Mo on the thermodynamics of Fe:Mo nanoparticles as catalysts for growing single-walled carbon nanotubes (SWCNTs). Adding an appropriate amount of Mo to Fe particles avoids the formation of stable binary Fe$_3$C carbide that can terminate SWCNTs growth. Eventhough the formation of ternary carbides in Fe-Mo-C system might also reduce the activity of the catalyst, there are regions in the Fe:Mo which contain enough free Fe and excess carbon to yield nanotubes. Furthermore, the ternary carbides become stable at a smaller size of particle as compared to Fe$_3$C indicating that Fe:Mo particles can be used to grow smaller SWCNTs.
Type
Dissertation
Department
Mechanical Engineering and Materials Science
Subject
Engineering, Materials Science
Physics, Condensed Matter
Chemistry, Physical
quasicrystal
adsorption
low friction
embedded
atom method
carbon nanotube
catalyst
Permalink
https://hdl.handle.net/10161/592
Citation
Setyawan, Wahyu (2008). Computational Study of Low-friction Quasicrystalline Coatings via Simulations of Thin Film Growth of Hydrocarbons and Rare Gases. Dissertation, Duke University. Retrieved from https://hdl.handle.net/10161/592.
Collections
More Info
Show full item record