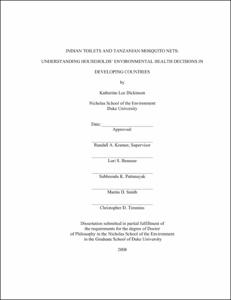 View / Download
4.3 Mb
Date
Author
Dickinson, Katherine Lee
Advisor
Kramer, Randall A
Repository Usage Stats
461
views
1,235
downloads
Abstract
Diarrhea and malaria are two of the most devastating public health threats in the developing world, resulting in millions of childhood deaths each year. Part of the challenge in addressing these threats arises from the fact that many of the causes of and potential remedies for these diseases lie squarely at the intersection of environment, development, and health. In addition, while many environmental, economic, and health-related policies focus on expanding access to new technologies (e.g., latrines, mosquito nets), inadequate attention to factors that affect the use of these technologies often leads to disappointing policy outcomes. This dissertation applies an economic framework to explore the drivers of households' environmental health decisions in two specific contexts. The first study examines sanitation behaviors and child health outcomes in Orissa, India, while the second case involves malaria-related knowledge, prevention, and treatment behaviors in Mvomero, Tanzania. In both cases, theoretical models are developed that focus on the perceived costs and benefits households consider in their decisions to adopt certain behaviors. A key insight is that technologies targeting diarrhea and malaria have characteristics of both private and public goods. For both epidemiological and social reasons, the payoffs to adopting behavior changes such as using a latrine or a mosquito net will depend in part on the behavior of other households in the village or neighborhood. This motivates an examination of the role of social networks and social interactions in influencing households' environmental health choices in both empirical studies. The first empirical case involves a study of a randomized community-level sanitation intervention in Orissa, India. Household survey data were collected before and after the sanitation campaign in 1050 households in 40 rural villages. Impact evaluation analyses indicate that the campaign resulted in large increases in latrine use in the randomly selected "treatment" villages. In addition, some analyses suggest that child health outcomes may have improved as a result of the campaign. To examine the drivers of the observed behavior change, econometric models are run including household and village characteristics as well as indicators of social interactions. Results indicate that households were more likely to adopt latrines when they observed more adoption among their peers. Thus, part of the sanitation campaign's success was likely due to its emphasis on targeting villages rather than individuals and strengthening social pressure to adopt latrines. The second empirical case examines indicators of households' malaria-related knowledge, prevention, and treatment behaviors in Mvomero, Tanzania. Survey data from 408 households in 10 villages shed light on a number of malaria control behaviors, including use of bed nets and anti-malarial medications. Findings suggest that the majority of households (over 80%) in this area own and use mosquito nets. At the same time, malaria continues to impose a significant burden on the study population. Data collected in Mvomero also provide unique information on the patterns of social interaction among households within and across different villages, and additional analyses explore the role of social interactions in influencing households' malaria-related decisions. Results suggest that patterns of interaction are influenced by a number of factors, including physical proximity as well as tribe, religion, and wealth. In addition, social effects may play an important role in influencing households' malaria prevention and treatment decisions. Together, these studies help to shed light on the ways households perceive and respond to two specific environmental health threats. More generally, this study illustrates the potential benefits of applying economic tools and analyses to problems like sanitation and malaria, and expanding the definition of "environmental problems" beyond the typical set of first-world issues (e.g., industrial pollution) to include these pressing issues facing the world's most vulnerable populations.
Type
Dissertation
Department
Environment
Subject
Economics, General
Environmental Sciences
Health Sciences, Public Health
environmental economics
global health
economic development
malaria
sanitation
household decision making
Permalink
https://hdl.handle.net/10161/593
Citation
Dickinson, Katherine Lee (2008). Indian Toilets and Tanzanian Mosquito Nets: Understanding Households' Environmental Health Decisions in Developing Countries. Dissertation, Duke University. Retrieved from https://hdl.handle.net/10161/593.
Collections
More Info
Show full item record