Life of the Party or Just a Third Wheel? Effects of Third Parties in U.S. House Elections 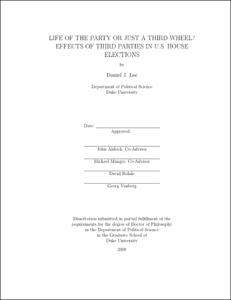 View / Download
714.6 Kb
Date
Author
Lee, Daniel John
Advisors
Aldrich, John
Munger, Michael
Repository Usage Stats
493
views
579
downloads
Abstract
How is two-party electoral competition influenced by third parties, even under normal political conditions? I argue that the mere threat of third party entry into the election induces anticipatory electoral strategies by the major parties. This effect, which is a normal aspect of the two-party system, is how third parties play a consistent role in U.S. elections. The ability for third parties to influence the major parties is moderated by electoral institutions. The ballot access requirement, in the form of a signature requirement, varies widely across House elections and is a significant predictor of third party electoral success. Consistent with conventional wisdom, I find that it has a negative effect on the likelihood of entry. Notably, the requirement also has a positive effect on third party vote shares, conditional on successful petitioning, due to a screening and quality effect. I explore the effects of third party threat in unidimensional and multidimensional settings. A formal model of elections predicts that the threat of entry induces major party divergence in a unidimensional ideological space. The major parties diverge in anticipation of potential third party entry. An empirical analysis of candidate positioning in the 1996 U.S. House elections finds support of this hypothesis. Data on major party campaign advertising in the 2000 to 2004 U.S. House elections are used to assess third party effects in a multidimensional framework. I show that third party threat influences the scope and content of campaign advertising. Major party candidates, particularly incumbents, discuss a broader range of issues when third party threat is higher. I use the case of environmental issues and the Green party to assess the influence of third parties on issue-specific content. I find that Green party threat leads to predictable differences between Democratic and Republican advertising on environmental issues. In sum, third parties play a consistent role in U.S. House elections by inducing anticipatory strategies by the major parties. This strategic framework for understanding third parties stresses two things. First, one should focus on the major parties in order to gauge the influence of third parties. Second, one should not conclude that third parties are irrelevant because of their minimal electoral success. Third party effects are in fact present even in elections where a third party does not enter.
Type
Dissertation
Department
Political Science
Subject
Political Science, General
Permalink
https://hdl.handle.net/10161/594
Citation
Lee, Daniel John (2008). Life of the Party or Just a Third Wheel? Effects of Third Parties in U.S. House Elections. Dissertation, Duke University. Retrieved from https://hdl.handle.net/10161/594.
Collections
More Info
Show full item record