Does perception equal reality? Weight misperception in relation to weight-related attitudes and behaviors among overweight and obese US adults 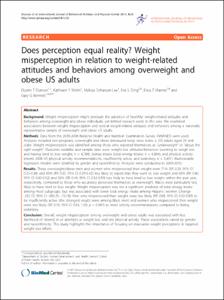 Professor in the Department of Psychology and Neuroscience
Please note that this is not our primary website.To learn more about Dr. Bennett, please visit: drgarybennett.comTo learn more about Dr. Bennett's work with Duke Digital Health, please visit: dukedigitalhealth.org Gary G. Bennett is the Bishop-MacDermott Family Professor of Psychology & Neuroscience, Global Health, and Medicine at Duke Univ