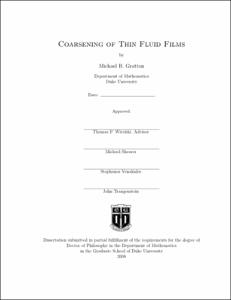 View / Download
2.2 Mb
Date
Author
Gratton, Michael B.
Advisor
Witelski, Thomas P.
Repository Usage Stats
437
views
622
downloads
Abstract
Observed in many physical systems, coarsening is an orderly decrease in the number of localized structures, such as particles, drops, shear bands, solitons, or point defects. Coarsening is a type of pattern formation in which the characteristic length scale between features grows while the total number of features decreases. These phenomena have been studied in many problems and several mathematical techniques for modeling these phenomena have been developed. This dissertation examines the aggregation of drops in the thin film equation, where drops may coarsen through two general mechanisms: collision and collapse. A series of simplifications to model this process is developed. Slender-body asymptotics is applied to the Navier-Stokes equations for fluid motion in order to derive the Reynolds lubrication equation. The lubrication equation is in turn simplified to a coarsening dynamical system (CDS) model for interacting drops through solvability conditions for a perturbation about a drop-type steady state. Lastly, the dynamical system is averaged into an ensemble model to describe the dynamics of the distribution of drop sizes. The ensemble model takes the form of an integro-differential equation for the distribution function, much like the model of Ostwald ripening proposed by Lifshitz and Slyozov. A convenient choice of scaling yields an intermediate asymptotic self-similar solution. This solution is compared to numerical simulations of the ensemble model and histograms of drop masses from the CDS model. The early-time dynamics before similarity are explored by varying the initial distribution of drop sizes. Interesting far-from-similarity ``stairstep'' behavior is observed in the coarsening rate when the initial distribution has a very small variance. A well-chosen initial condition with a fractal-like structure is shown to replicate the stairstep behavior. At very long times, the mean drop size grows large, requiring the inclusion of gravity in the model. The CDS model parameters are modified as a result of the dependence of drop shapes on both size and gravity. The new dynamical system predicts the coarsening rate slowing from a power law to an inverse logarithmic rate. The energy liberated by each coarsening event is shown to approach a gravity-dependent constant as the mean drop mass increases. This suggests a reason for the coarsening slow-down.
Type
Dissertation
Department
Mathematics
Subject
Mathematics
Coarsening
Thin films
Stairstep
Coarsening Dynamical System
Permalink
https://hdl.handle.net/10161/595
Citation
Gratton, Michael B. (2008). Coarsening of Thin Fluid Films. Dissertation, Duke University. Retrieved from https://hdl.handle.net/10161/595.
Collections
More Info
Show full item record