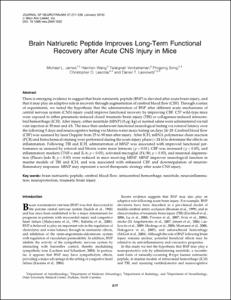 Professor of Neurology
Our laboratory uses molecular biology, cell culture, and animal modeling techniques to examine the CNS response to acute injury. In particular, our laboratory examines the role of microglial activation and the endogenous CNS inflammatory response in exacerbating secondary injury following acute brain insult. Much of the in vitro work in this laboratory is dedicated to elucidating cellular responses to injury with the ultimate goal of exploring new therapeutic interventions in the clinical settin