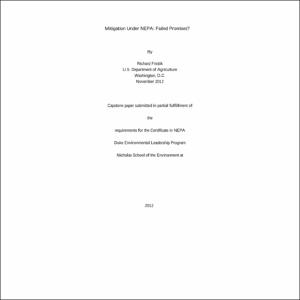 View / Download
164.2 Kb
Date
Author
Fristik, Richard
Repository Usage Stats
922
views
746
downloads
Abstract
Introduction When the environmental impacts of federal actions are assessed under the National Environmental Policy Act (NEPA),1 if adverse effects are identified, agencies are to describe measures to mitigate these effects to the extent possible. This paper will examine mitigation in terms of intention (what it was intended to be or accomplish), interpretation (varying viewpoints from the perspective of agencies, project proponents, the public), implementation (responsibilities, resources, gauging success), litigation (outcomes and their influence on the state of practice) and finally, application (a comparative study of two federal agencies). Mitigation Defined The dictionary defines mitigate or mitigation as "to cause to become less harsh or hostile, mollify, to make less severe or painful."2 Based on this definition, on the surface mitigation would appear straightforward when applied to environmental impacts; but is that truly the case? Although NEPA itself does not specifically mention mitigation, the Council on Environmental Quality (CEQ) implementing regulations, and succeeding CEQ guidance4 primarily define and describe mitigation and the so-called 'mitigation hierarchy' or 'sequencing’ - avoid, minimize, rectify, reduce or eliminate over time, and compensate. The first instance of elements of mitigation being mentioned in the CEQ implementing regulations is in the context of identifying and analyzing alternatives.5 Indeed, it is preferable to focus on project alternatives that avoid impacts in the first place, as opposed to requiring more substantial, difficult or costly measures upon project implementation. At the same time, it is an established principle that NEPA does not pose a substantive requirement upon agencies to mitigate, perhaps aligning with the view still sometimes voiced that NEPA is primarily a 'procedural' statute, lacking real 'teeth'. But while NEPA may not impose substantive environmental mandates, it does require federal agencies to establish procedures to account for the environmental effects of certain proposed actions,7 and indeed even from its early years, bore a more substantive tone and content than perhaps realized, subsequently reinforced by the courts.
Type
Report
Subject
NEPA, Mitigation, Federal Agencies
Permalink
https://hdl.handle.net/10161/5980
Citation
Fristik, Richard (2012). Mitigation Under NEPA: Failed Promises?. Retrieved from https://hdl.handle.net/10161/5980.
Collections
More Info
Show full item record