The Island of Moss and Snow 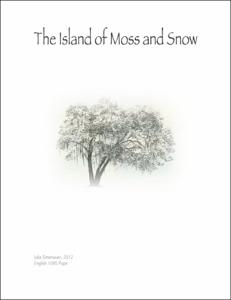 View / Download
4.7 Mb
Date
Author
Simenauer, Julia
Repository Usage Stats
273
views
151
downloads
Abstract
This poetic project was inspired by extensive research of the John Zeigler Papers, a collection of letters between John Zeigler and Edwin Peacock, two gay men serving in the U.S. military during World War II. The relationship between Zeigler and Peacock is nothing short of extraordinary—they were homosexual lovers living in the conservative deep south who were later enlisted into military service and stationed in different Alaskan towns. The John Zeigler Papers contains the correspondence between these two men spanning 1927-2011, with the majority of their letters occurring during their separation throughout the war. Due to the insurmountable intolerance of homosexuality during this time period, the two were forced to disguise the nature of their relationship. For example, they signed their letters with “Your Cousin,” in order to avoid suspicion regarding their closeness and affection. Despite such direct efforts to hide their partnership, their adoration for one another rings vibrantly in every singly letter. Among the mundane details of their day-to-day lives in the army camps, both Zeigler and Peacock are able to subtly convey their passion with short poems and discreetly loving lines. The artistic strength of the letters is undoubtedly enhanced by the fact that Zeigler and Peacock were both men of literature; Zeigler in particular was an immensely talented writer who would eventually publish two successful volumes of poetry, Alaska and Beyond (1984) and The Edwin Poems (2007). Thus, their skillful writing masterfully conveys the utter intensity and depth of their unthinkable partnership, as well as the heartache of the prejudice and separation they must face. As a result, this stunning collection of letters creates an enchanting love story entirely unlike any other. Their correspondence is an absolute treasure and it is my deepest hope that my poetry, in response to this breathtaking material, is able to effectively capture and convey even a glimmer of the remarkable ardor between Zeigler and Peacock in the face of staggering adversities.
Description
Project for English 109S: Special Topics in Creative Writing (Poetry and Memory), Winner of the Chester P. Middlesworth Award
Type
Course paper
Department
English
Subject
Zeigler Papers
Poetry
Rare Book Room
Rare Manuscripts
Permalink
https://hdl.handle.net/10161/5984
Citation
Simenauer, Julia (2012). The Island of Moss and Snow. Course paper, Duke University. Retrieved from https://hdl.handle.net/10161/5984.
Collections
More Info
Show full item record