NEPA AND PRIVATE AIDS TO NAVIGATION 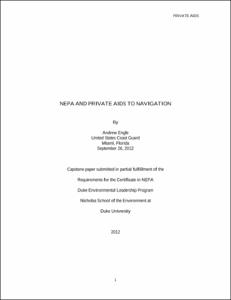 View / Download
108.1 Kb
Date
Author
Engle, Andrew
Repository Usage Stats
273
views
259
downloads
Abstract
The United States Coast Guard administers the U. S. Aids to Navigation system. The system consists of Federal aids to navigation operated by the U. S. Coast Guard, aids to navigation operated by the other armed services, and private aids to navigation operated by other persons. Aids to navigation (ATON), is vital to guide commercial mariners in and out of U. S. ports to ensure commerce, as well as people, can move safely in and out of those ports. In addition to our commercial vessels, recreational boaters also depend on ATON for safe navigation throughout all the waterways of the United States. Private Aids to Navigation (PATON) are those aids to navigation which are used to guide mariners into public marinas, private associations, county and state facilities and, they are used to regulate private anchorages or mooring fields. Simply put, PATON includes all marine aids to navigation operated in the navigable waters of the United States other than those operated by the Federal Government. Title 33 Code of Federal Regulations Part 66 provides basic provisions and grants delegation authority to U. S. Coast Guard District Commanders. The authorization of PATON does not authorize any invasion of private rights, nor grant any exclusive privileges, nor does it obviate the necessity of complying with any other Federal, State or local laws and regulations. To apply for a U. S. Coast Guard PATON permit, an application must be completed and submitted to the appropriate U. S. Coast Guard District describing the nature of the project, position of the proposed aids, characteristics of the aids, and include a copy of all required permits issued by any pertinent agency.
Type
Report
Subject
United States Coast Guard, NEPA, Navigation
Permalink
https://hdl.handle.net/10161/5987
Citation
Engle, Andrew (2012). NEPA AND PRIVATE AIDS TO NAVIGATION. Retrieved from https://hdl.handle.net/10161/5987.
Collections
More Info
Show full item record