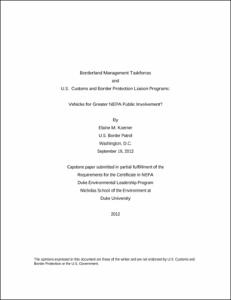 View / Download
350.8 Kb
Date
Author
Koerner, Elaine M.
Repository Usage Stats
373
views
313
downloads
Abstract
“One of the primary goals of the National Environmental Policy Act (NEPA) is to encourage meaningful public input and involvement in the process of evaluating the environmental impacts of proposed federal actions,” according to the President’s Council on Environmental Quality (CEQ). Reaching this goal can be a challenge anywhere within the United States, but in U.S. border communities it can be particularly challenging. Along the southwest border in particular, security concerns too often continue to be pitted against environmental concerns, suggesting a choice is required. Pockets of poverty, language barriers, and the national lack of resolution on immigration issues can divert public attention away from environmental issues. As a result, providing meaningful input into NEPA processes can all too easily become a low priority for the public. The northern border has its own set of challenges. Here, distances between public meeting sites can be vast, and harsh winter conditions in some areas further impede participation at public meetings set up to provide information about federal projects with potential environmental impacts. In addition, given the perceived abundance of undisturbed natural resources, there may be a sense from some that individual proposed federal actions will have a negligible negative effect. Although non-governmental organizations focused on the preservation of particular species such as the grizzly bear along the northern border of Idaho and Washington State continue to gain media attention, overarching concerns such as jobs often continue to trump concerns about potential environmental impacts of proposed federal actions. Two border-specific governmental communication mechanisms have been created in recent years that provide the opportunity to indirectly increase public input into the NEPA process: intergovernmental groups called Borderlands Management Taskforces (BMTFs); and the uniformed personnel within U.S. Customs and Border Protection (CBP) who serve as Liaisons to specific components of the stakeholder spectrum. These liaison positions include Public Lands Liaison Agents, Tribal Liaisons, and Border Community Liaisons, as well as more specialized liaison positions such as Rancher Liaison. Both of these communications mechanisms were created primarily to promote intergovernmental collaboration for mutual mission success, leverage resources to the betterment of all participating groups, and resolve problems at the local level. However, their presence in border communities positions them well to also promote communication on a variety of associated developments – including federal actions that trigger NEPA analyses with accompanying public involvement. The discussion that follows will provide more details about each mechanism and explore their broader potential to be harnessed for NEPA public involvement purposes.
Type
Report
Subject
NEPA
Permalink
https://hdl.handle.net/10161/5998
Citation
Koerner, Elaine M. (2012). Borderland Management Taskforces and U.S. Customs and Border Protection Liaison Programs: Vehicles for Greater NEPA Public Involvement?. Retrieved from https://hdl.handle.net/10161/5998.
Collections
More Info
Show full item record