WETLAND MITIGATION AND THE ROLE OF NEPA 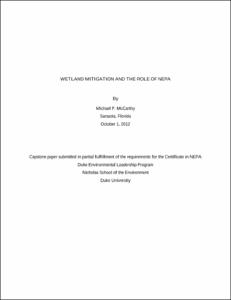 View / Download
255.0 Kb
Date
Author
McCarthy, Michael
Repository Usage Stats
406
views
499
downloads
Abstract
This paper examines wetland mitigation in the context of the recent Areawide Environmental Impact Statement (AEIS) on Phosphate Mining in the Central Florida Phosphate District prepared by the United States Army Corps of Engineers (USACE or Corps), and discusses the role the National Environmental Policy Act of 1969 (NEPA) may play in a re-evaluation of the current policy and practices of wetland mitigation. The phosphate industry is seeking to construct new mines and expand existing mining activities in the Central Florida Phosphate District and has applied to the USACE for permits under Section 404 of the Clean Water Act, which prohibits the discharge of dredged or fill material in waters of the United States, including certain wetlands, without a permit from the Corps. Three of the applications were submitted by Mosaic Fertilizer, LLC and one by CF Industries, Inc. The impacts to wetlands from the proposed mining activity in question are primarily associated with land preparation (clearing and grading), the actual mining of phosphate, and the construction of associated infrastructure. Within the areas that are mined, wetlands are drained and cleared prior to mining. Mining infrastructure consists primarily of the beneficiation plant where phosphate is separated from other minerals, clay settling areas (CSAs), ditch and berms systems, and corridors connecting the mining areas with the beneficiation plant. NEPA requires federal agencies to consider the environmental effects of their actions. As a federal agency, the Corps has determined that issuance of the four permit applications constitute a “major Federal action significantly affecting the quality of the human environment” under NEPA, and, as required by the Act, has prepared a detailed statement. According to John Fellows, Regulatory Project Manager with the USACE, once it was determined that the mining projects would have significant impacts, an environmental impact statement, or EIS, was considered the appropriate tool to satisfy the requirements under NEPA rather than a less detailed environmental assessment, or EA, which is standard for projects with minimal environmental impacts. Further, given the expanse of the mining sites (the four sites contain 37,103 acres within the 1.32 million-acre Central Florida Phosphate District) and the similarity of the four mining projects, one comprehensive impact statement was considered appropriate, which has been designated an Area Environmental Impact Statement. The Notice of Availability for the draft AEIS was published on June 1, 2012 and the comment period, initially 45 days, was extended to July 31, 2012 after pressure from local stakeholders who had requested a 90-day extension. A third piece of relevant legislation, actually more of a national policy, is the “No Net Loss” goal of wetland preservation. First pronounced in 1989 by President George H. Bush and followed by subsequent administrations, No Net Loss seeks to preserve the nation’s wetlands by directing that any wetlands destroyed by a given activity must be replaced by the same amount, so that on balance what is eliminated is made up for, and so there is no “net” loss of wetland function. An applicant for a Section 404 permits whose activities will impair or destroy wetlands must propose to compensate, or mitigate, for any loss of wetland acreage or function. In the current phosphate mining applications, the estimate of existing wetlands to be disturbed is approximately 9,849 acres, and so a need for compensatory mitigation is evident. The proposed mining activities will also have a potential wide range of environmental consequences, such as effects on streams and waterways, habitat loss from the enormous land requirements needed for mining, the demands on the local water supply (phosphate mining requires massive amounts of water to separate out the phosphate from the ore), the effects of construction on neighboring land uses and communities, and the storage of the hazardous byproduct phosphogypsum. However, this discussion is restricted to mitigation efforts as they relate to jurisdictional wetlands.
Type
Report
Subject
NEPA, WETLAND, MITIGATION
Permalink
https://hdl.handle.net/10161/6001
Citation
McCarthy, Michael (2012). WETLAND MITIGATION AND THE ROLE OF NEPA. Retrieved from https://hdl.handle.net/10161/6001.
Collections
More Info
Show full item record