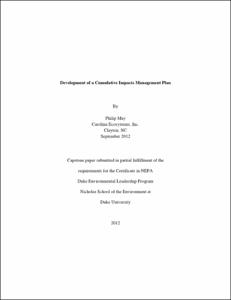 View / Download
93.1 Kb
Date
Author
May, Philip
Repository Usage Stats
217
views
287
downloads
Abstract
The City of High Point developed an Environmental Assessment and Secondary and Cumulative Impacts Management Plan to assess environmental issues associated with a sewer line replacement in High Point, North Carolina. The project began as an EA addressing the potential impacts of construction and operation of a sewer line that would replace an existing line. The existing line had numerous issues including exposed sections in the stream, leakage and infiltration of groundwater. As the EA was developed and reviewed by regulatory agencies, the focus of concern became the increased capacity of the new line and its potential to promote development and associated environmental impacts. Rather than revise the EA to comprehensively address secondary and cumulative impacts, it was proposed to address direct impacts of the line replacement in the EA while developing a separate Management Plan for cumulative impacts within the entire treatment plant service area. This allowed for the EA to be processed relatively quickly and the replacement sewer line construction to begin, while also providing time for the City to comprehensively address cumulative impacts on a service area scale and limit comments on future projects within the same service area. As the City was not only the project owner, but also controlled local ordinances that could mitigate for the environmental effects of development in the service area, local ordinances were assessed and amended to address key concerns from scoping. The resulting process and documents satisfied the requirements of the City and the agencies, and will allow future environmental documents in the area to tier with the plan and reduce review burdens and time frames.
Type
Report
Subject
NEPA, Cumulative Impacts, Management Plan
Permalink
https://hdl.handle.net/10161/6007
Citation
May, Philip (2012). Development of a Cumulative Impacts Management Plan. Retrieved from https://hdl.handle.net/10161/6007.
Collections
More Info
Show full item record