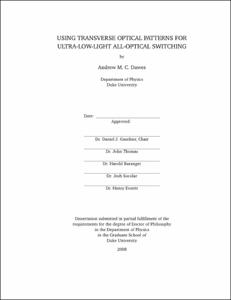 View / Download
7.7 Mb
Date
Author
Dawes, Andrew M. C.
Advisor
Gauthier, Daniel J
Repository Usage Stats
274
views
149
downloads
Abstract
All-optical devices allow improvements in the speed of optical communication and computation systems by avoiding the conversion between the optical and electronic domains. The focus of this thesis is the experimental investigation of a new type of all-optical switch that is based on the control of optical patterns formed by nonlinear interactions between light and matter. The all-optical switch consists of a pair of light beams that counterpropagate through warm rubidium vapor. These beams induce a nonlinear optical instability that gives rise to mirrorless parametric self-oscillation and generates light in the state of polarization that is orthogonal to that of the pump beams. In the far-field, the generated light forms patterns consisting of two or more spots. To characterize this instability, I observe experimentally the amount of generated power and the properties of the generated patterns as a function of pump beam intensity, frequency, and size. Near an atomic resonance, the instability has a very low threshold: with less than 1~mW of total pump power, >3~$\mu$W of power is generated. To apply this system to all-optical switching, I observe that the orientation of the generated patterns can be controlled by introducing a symmetry-breaking perturbation to the system. A perturbation in the form of a weak switch beam injected into the nonlinear medium is suitable for controlling the orientation of the generated patterns. The device operates as a switch where each state of the pattern orientation corresponds to a state of the switch, and spatial filtering of the generated pattern defines the output ports of the device. Measurements of the switch response show that it can be actuated by as few as 600~photons. For a switch beam with 1/e field radius $w_0=185\,\mu$m, 600 photons correspond to $5.4\times10^{-4}$ photons/\lambdasquared which is comparable to the best reported results from all-optical switches based on electromagnetically-induced transparentcy (EIT). This approach to all-optical switching operates at very low light levels and exhibits cascadability and transistorlike response. Furthermore, the sensitivity is comparable to switches using cold-atom EIT or cavity quantum-electrodynamics techniques but is achieved with a simpler system, requiring only one optical frequency and occurring in warm atomic vapor. I develop a numerical model for the switch that exhibits patterns that rotate in the presence of a weak applied optical field. Results from this model, and from my experiment, show that the switch response time increases as the input power decreases. I propose that this increase is due to critical slowing down (CSD). Mapping the pattern orientation to a simple one-dimensional system shows that CSD can account for the observed increase in response time at low input power. The ultimate performance of the device is likely limited by CSD and I conclude that the minimum number of photons capable of actuating the switch is between 400 and 600 photons.
Type
Dissertation
Department
Physics
Subject
Physics, Optics
all optical
switch
rubidium
hexagon
rotation
Permalink
https://hdl.handle.net/10161/604
Citation
Dawes, Andrew M. C. (2008). Using Transverse Optical Patterns for Ultra-Low-Light All-Optical Switching. Dissertation, Duke University. Retrieved from https://hdl.handle.net/10161/604.
Collections
More Info
Show full item record