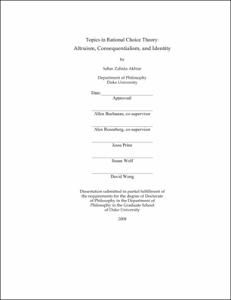 View / Download
878.9 Kb
Date
Author
Akhtar, Sahar Z
Advisors
Buchanan, Allen
Rosenberg, Alex
Repository Usage Stats
2,072
views
5,509
downloads
Abstract
Rational Choice theory includes a broad body of research that attempts to account for how people act in a variety of contexts, including economic, political and even moral situations. By proposing, most generally, that individuals rationally pursue their self-interests regardless of the context, rational choice has had extensive theoretical and empirical success, on the one hand, and has also faced wide criticism when applied in a variety of disciplines, on the other hand. While there is disagreement over what the defining assumptions of rational choice theory are, in this dissertation I focus on three on which there is widespread agreement. These three features of rational choice theory are: its assumption of egoism or self-interest as the central motivation of individuals; its reliance on consequences as part of a comparative decision-making framework; and finally, its focus on the individual and not on groups as the methodological and normative unit of analysis. In correspondence to these three features, my dissertation is divided into three parts and explores the separate topics of (I) egoism and altruism; (II) consequentialism and ethical decision-making; and, (III) individualism and group identity. The dissertation is not an exercise in showing the extensive problems of rational choice theory, although there are many. The dissertation rather engages these three topics with differing results, some of which in fact attempts to revitalize rational choice, or at least features of rational choice. For the part on altruism, my goal is to demonstrate why the central assumption of egoism in rational choice theory is problematic. More broadly, I argue for a different way of defining genuine altruistic motivation. A result of my analysis there is that altruism appears to be more widespread than has been traditionally assumed and is more amenable to empirical examination. For my discussion on consequentialism, my aim is to re-characterize rational choice as a mode of moral decision-making. I argue that the moral agent is one who frequently compares her particular moral ends in a stable fashion and for this reason cost-benefit analysis is a fully moral framework, one that encourages the agent to genuinely care for her ends and values. For the topic of individualism and group identity, my objective is to show how a previously dismissed topic, once unpacked, is fully consistent with rational choice theory and ought to be of interest to the rational choice theorist. I show that if the liberal political theorist, including the rational choice theorist, is to value group identity, the commitment is only limited to valuing a form of group identity--particularized identity--that is individualist in character.
Type
Dissertation
Department
Philosophy
Subject
Philosophy
Political Science, General
rational choice
altruism
consequentialism
individualism
identity
Permalink
https://hdl.handle.net/10161/605
Citation
Akhtar, Sahar Z (2008). Topics in Rational Choice Theory. Dissertation, Duke University. Retrieved from https://hdl.handle.net/10161/605.
Collections
More Info
Show full item record