Communicative Structure and the Emergence of Armed Conflict 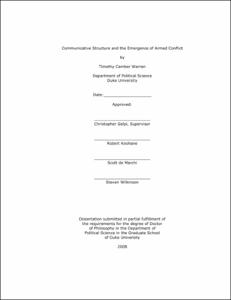 View / Download
4.1 Mb
Date
Author
Warren, Timothy Camber
Advisor
Gelpi, Christopher
Repository Usage Stats
387
views
402
downloads
Abstract
The goal of this dissertation is to provide a logically coherent and empirically grounded account of the relationships between collective communication, collective loyalties, and collective violence. Drawing on research from an array of disciplines, ranging from psychology to economics and sociology, I develop a new theoretical framework that I term "communicative structuralism." The central claim of this framework is that the communicative processes upon which the formation of collective identities and loyalties are based are structurally constrained in systematic ways. More specifically, it claims that public communicative structures, those which transmit synchronized messages and thus generate joint awareness of those messages amongst a collective audience, are central to the development of national, sub-national, and transnational symbolic allegiances because they create communities of shared experience and thereby generate symbolic touchstones which allow individuals to feel connected to a seemingly unified moral community. To test this theory, I collect data on the structural properties of the most prominent public communicative structures in the contemporary state system - those constituted by the mass media networks of newspapers, radios, and televisions - in 177 countries for the period 1945 - 1999. I then use this data to test the implications of the theory at two separate levels of analysis: (1) at the individual level the theory is tested using cross-national survey data on media exposure and state allegiance from over 30,000 respondents in 38 countries, and (2) at the state level the theory is tested using cross-national time-series data on civil conflict, identity fragmentation, and regime stability. I each case, the central finding is that mass media structures are fundamentally involved in generating the conditions for the formation of collective audiences (that is, audiences which are composed of members who are jointly aware of themselves as a collective). The dissertation demonstrates that such collective audiences, when constituted on a national scale by dense public communicative structures (i.e. mass media), make individuals more inclined to feel affective attachments to their country, and reduce the propensity to sociopolitical fragmentation thereby lessening the risk of large-scale civil conflict. In making this demonstration, the dissertation attempts to triangulate through the use of a wide variety of quantitative techniques, including multilevel hierarchical linear models, structural equation models, non-parametric tests of predictive accuracy, Bayesian model averaging, social network analysis, and agent-based computational simulations. I also ground the analysis in careful qualitative process-tracing of the disintegration of the Yugoslavian federation.
Type
Dissertation
Department
Political Science
Subject
Political Science, International Law and Relations
Mass Media
Group Loyalty
Civil War
Communication
Network
Permalink
https://hdl.handle.net/10161/606
Citation
Warren, Timothy Camber (2008). Communicative Structure and the Emergence of Armed Conflict. Dissertation, Duke University. Retrieved from https://hdl.handle.net/10161/606.
Collections
More Info
Show full item record