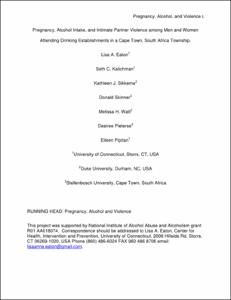 Research Professor in the Department of Psychology and Neuroscience
Kathleen J. Sikkema, Ph.D., Gosnell Family Professor of Global Health, Psychology and Neuroscience, and Psychiatry and Behavioral Sciences at Duke University, is a clinical psychologist with emphases in health and community psychology. She is the Director of Doctoral Studies at the Duke Global Health Institute (DGHI), Director of the Social and Behavioral Science Core in Duke's Center for AIDS Research (CFAR), an Adjunct Associate Professor of Global Health
Dr. Watt's research focuses on understanding and addressing gender-specific health issues in sub-Saharan Africa, with specific attention to HIV, substance use and mental health. In Tanzania, she currently leads an implementation science study aimed at improving access to long-term antiretroviral therapy for pregnant women with HIV. In South Africa, she is collaborating with Dr. Kathleen Sikkema on a study to support H
Alphabetical list of authors with Scholars@Duke profiles.