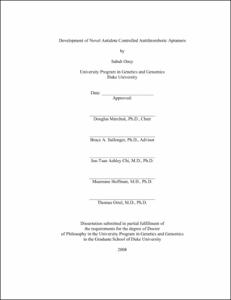 View / Download
13.2 Mb
Date
Author
Oney, Sabah
Advisor
Sullenger, Bruce A
Repository Usage Stats
398
views
641
downloads
Abstract
Thrombosis is initiated by platelets and leads to cardio-, cerebro-, and peripheral vascular disease, the leading causes of morbidity and mortality in the western world. Antiplatelet drugs have improved clinical outcomes for thrombosis patients. However, their expanded use is limited by hemorrhage at high concentrations and sub-therapeutic activity at lower doses. Thus, development of new antiplatelet agents with improved safety and efficacy is a medical priority. VWF is a multimeric plasma glycoprotein that plays a critical role in platelet-mediated thrombus formation and presents an attractive target for antiplatelet therapy. To this end, I have isolated and characterized aptamer molecules that bind to VWF with high affinity and have shown that some of these aptamer molecules could inhibit platelet activation/aggregation in vitro and in vivo. Furthermore, I designed antidote molecules that can reverse the effects of the aptamer molecules, restoring platelet function quickly and effectively. This project has yielded the first antidote controlled antiplatelet agent and may lead to significant improvements in thrombosis therapy. Thrombin is a plasma protein that plays a critical role in thrombosis. Currently, available antithrombin agents are efficacious in preventing coagulation but do not significantly affect platelet activation and aggregation, both essential components of thrombus formation. Therefore, I tested two aptamer molecules that bind to mutually exclusive exosites on thrombin and, when used together, synergistically inhibit both coagulation and platelet activation. I demonstrated that this method could potentially lead to the development of effective antithrombotic therapies. With an ever-increasing number of people taking multiple medications, the need to safely administer drugs and limit unintended side effects has never been greater. Antidote control remains the most direct means to counteract acute side effects of drugs but unfortunately it has been challenging and cost prohibitive to generate antidotes for most therapeutic agents. Therefore, I described the development of a set of antidote molecules that are capable of counteracting the effects of an entire class of therapeutic agents, i.e. aptamers, including those that I generated against VWF. I demonstrated that protein and polymer-based molecules that capture oligonucleotides can reverse the activity of aptamers in vitro and in vivo.
Type
Dissertation
Department
Genetics and Genomics
Subject
Biology, Genetics
Health Sciences, Pharmacology
Biology, Genetics
Aptamers
Antidote
Thrombosis
VWF
Platelets
Antiplatelet
Permalink
https://hdl.handle.net/10161/608
Citation
Oney, Sabah (2008). Development of Novel Antidote Controlled Antithrombotic Aptamers. Dissertation, Duke University. Retrieved from https://hdl.handle.net/10161/608.
Collections
More Info
Show full item record