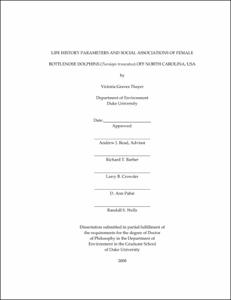 View / Download
1.2 Mb
Date
Author
Thayer, Victoria Graves
Advisor
Read, Andrew J
Repository Usage Stats
330
views
1,194
downloads
Abstract
In this study, I describe the seasonality of reproduction in bottlenose dolphins by examining data from stranded animals, photographic surveys and focal follows. I examined inter-birth intervals from focal follows of known female dolphins. I found bottlenose dolphins that frequent the coastal waters of North Carolina to be comprised of at least two populations; one with a primarily spring birthing peak and a presumed second (or second and third) with two smaller birthing peaks in the fall and winter. These animals are reproducing at 2-3 year inter-birth intervals, which are shorter than bottlenose dolphin inter-birth intervals in the Moray Firth, Scotland, Shark Bay, Australia, or Sarasota Bay, FL. A decrease in reproductive intervals can indicate a density-dependent response to an anthropogenic disturbance or a natural change. Association patterns between and among these known females revealed relationships that have persisted for more than a decade. Most association patterns of the female dolphins in this area are long-term casual acquaintances which are evident in the fission-fusion grouping pattern, and individuals are not highly gregarious. Females appear to associate with most other females in the local area and do not form bands, as defined by researchers in Sarasota, FL (Wells et al. 1987). However, females do exhibit preferred associates, with whom they associate, regardless of reproductive state. Associations of females with young of the year were slightly stronger than associations between females with different aged calves, except for preferred associates. Future work will include genetic research on some of these known females, and continued study of the life and reproductive histories of these known females and their offspring.
Type
Dissertation
Department
Environment
Subject
Biology, Zoology
Biology, General
Biology, Zoology
Life history
Birth intervals
Seasonality
Fecundity
Reproductive parameters
Permalink
https://hdl.handle.net/10161/609
Citation
Thayer, Victoria Graves (2008). Life History Parameters and Social Associations of Female Bottlenose Dolphins (Tursiops Truncatus) in North Carolina, USA. Dissertation, Duke University. Retrieved from https://hdl.handle.net/10161/609.
Collections
More Info
Show full item record