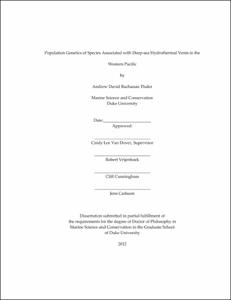 Genetic diversity, population structure, and connectivity influence interactions among communities and populations. At hydrothermal vents in the western pacific, population structure in vent-associated species could occur at spatial scales ranging from vent sites separated by a few hundred meters to oceanic basins separated by more than 3000 kilometers. The spatial scale of population structure has important conservation implications; species that are well-connected across large geographic regions are more resilient to natural and anthropogenic disturbance. This dissertation examines the genetic diversity, population structure, and connectivity of 3 vent-associated species in the western Pacific. It first presents results from the development of microsatellite primers for Ifremeria nautilei, a deep-sea vent associated snail, then uses mitochondrial COI sequences and a suite of microsatellite markers to examine the broader connectivity of three vent-associated species, Ifremeria nautilei, Chorocaris sp. 2, and Olgasolaris tollmanni, across three back-arc basins in the western Pacific.