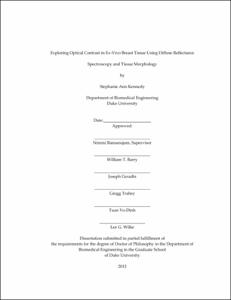 In 2011, an estimated 230,480 new cases of invasive breast cancer were diagnosed among women, as well as an estimated 57,650 additional cases of in situ breast cancer [1]. Breast conserving surgery (BCS) is a recommended surgical choice for women with early stage breast cancer (stages 0, I, II) and for those with Stage II-III disease who undergo successful neo-adjuvant treatment to reduce their tumor burden [2, 3]. Cancer within 2mm of a margin following BCS increases the risk of local recurrence and mortality [4-6]. Margin assessment presents an unmet clinical need. Breast tissue is markedly heterogeneous which makes identifying cancer foci within benign tissue challenging. Optical spectroscopy can provide surgeons with intra-operative diagnostic tools. Here, ex-vivo breast tissue is evaluated to determine which sources of optical contrast have the potential to detect malignancy at the margins in women of differing breast composition. Then, H&E images of ex-vivo breast tissue sites are quantified to further deconstruct the relationship between optical scattering and the underlying tissue morphology.

Diffuse reflectance spectra were measured from benign and malignant sites from the margins of lumpectomy specimens. Benign and malignant sites were compared and then stratified by tissue type and depth. The median and median absolute deviance (MAD) was calculated for each category. The frequencies of the benign tissue types were separated by menopausal status and compared to the corresponding optical properties.

H&E images were then taken of the malignant and benign sites and quantified to describe the % adipose, % collagen and % glands. Adipose sites, images at 10x, were predominantly fatty and quantified according to adipocyte morphology. H&E-stained adipose tissue sections were analyzed with an automated image processing algorithm to extract average cell area and cell density. Non-adipose sites were imaged with a 2.5x objective. Grids of 200µm boxes corresponding to the 3mm x 2mm area were overlaid on each non-adipose image. The non-adipose images were classified as the following: adipose and collagen (fibroadipose); collagen and glands (fibroglandular); adipose, collagen and glands (mixed); and malignant sites. Correlations between <&mus&#8242;> and % collagen in were determined in benign sites. Age, BMI, and MBD were then correlated to <&mus&#8242;> in the adipose and non-adipose sites. Variability in <&mus&#8242;> was determined to be related to collagen and not adipose content. In order to further investigate this relationship, the importance of age, BMI and MBD was analyzed after adjusting for the % collagen. Lastly, the relationship between % collagen and % glands was analyzed to determine the relative contributions of % collagen and % glands <&mus&#8242;>. Statistics were calculated using Wilcoxon rank-sum tests, Pearson correlation coefficients and linear fits in R.

The data indicate that the ability of an optical parameter to differentiate benign from malignant breast tissues is dictated by patient demographics. Scattering differentiated between malignant and adipose sites and would be most effective in post-menopausal women. [&beta-carotene] or [THb] may be more applicable in pre-menopausal women to differentiate malignant from fibrous sites. Patient demographics are therefore an important component to incorporate into optical characterization of breast specimens. Through the subsequent stepwise analysis of tissue morphology, <&mus&#8242;> was positively correlated to collagen and negatively correlated to age and BMI. Increased variability of <&mus&#8242;> with collagen level was not dependent on the adipose contribution. A stronger correlation between age and <&mus&#8242;> was seen in high collagen sites compared to low collagen sites. Contributions from collagen and glands to <&mus&#8242;> were independent and equivalent in benign sites; glands showed a stronger correlation to <&mus&#8242;> in malignant sites than collagen. This information will help develop improved scattering models and additional technologies from separating fibroglandular sites from malignant sites and ultimately improve margin assessment.