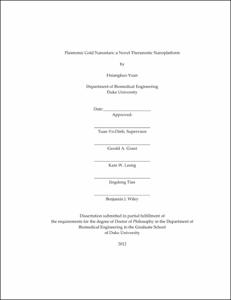 The advancement in nanotechnology creates a new perspective on future medicine. With more and more understanding on controlling the functional behavior of the nanoplatform, scientists nowadays are aiming to improve the health care system by offering personalized medicine through nanotechnology. Lots of emphasis have been placed on a promising field called theranostics, which integrate imaging and therapeutic functions into one, that not only offers monitoring and imaging of the biological process, but also provides diagnosis and drug delivery simultaneously. Plasmonic gold nanostars, because of its anisotropic geometry and unique plasmonic property, have become one of the most anticipated nanoplatform in the field of nanotheranostics, aiming to achieve superior plasmonic properties for biomedical applications. The work herein will provide an introduction to the related field on plasmonics, nanobiophotonics and nanotheranostics. A facile plasmon-tunable surfactant-free nanostars synthesis method is described followed by an extensive characterization both computationally and experimentally. Its superior plasmon behavior on two-photon photoluminescence imaging and surface-enhanced Raman scattering detection are demonstrated both in cells and in animals. Therapeutic function assessment is carried out both as drug carriers (photodynamic therapy) and as endogenous stimulus responsive agents (photothermal therapy). Finally, the nanostars' cellular uptake mechanism is investigated based on nanostars' endogenous contrast; an enhanced photothermal therapy is achieved using an ultralow irradiance that has ever published. With nanostars being a novel and powerful theranostic agent, the potentials implication lies in the study of their pharmacokinetics, targeted delivery, diagnostic imaging, and toxicity.