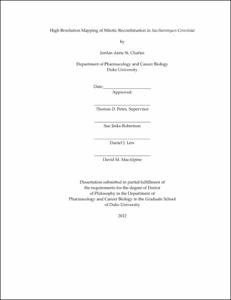 Double-stranded DNA breaks are potentially lethal lesions that can be repaired in mitotic cells by either homologous recombination (HR) or non-homologous end- joining (NHEJ) pathways. In the HR pathway, the broken DNA molecule is repaired using either the sister chromatid or the homolog as a template. Mitotic recombination events involving the homolog often result in loss of heterozygosity (LOH) of markers located distal to the crossover. In humans that are heterozygous for a mutation in a tumor suppressor gene, mitotic recombination leading to LOH can be an early step in cancer development.

In my thesis research, I analyzed mitotic recombination in the yeast Saccharomyces cerevisiae using oligonucleotide-containing microarrays to detect LOH of single-nucleotide polymorphisms (SNPs). In analyzing cells treated with ionizing radiation, I performed the first whole-genome analysis of LOH events done in any organism (Chapter 2). I showed that irradiated cells had between two and three unselected LOH events. I also showed that crossovers were often associated with non- reciprocal exchanges of genetic information (gene conversion events) and that these conversion events were more complex than predicted by standard models of homologous recombination.

In Chapter 3, I describe my mapping of spontaneous crossovers in a 1.1 Mb region of yeast chromosome IV. This analysis is the first high-resolution mitotic recombination map of a substantial fraction (about 10%) of a eukaryotic genome. I demonstrated the existence of recombination "hotspots" and showed that some of these hotspots were homolog-specific. Two of the strongest hotspots were formed by closely- spaced inverted repeats of retrotransposons. I demonstrated that the hotspot activity was a consequence of a secondary DNA structure formed by these repeats. Additionally, the majority of spontaneous LOH events reflect DNA lesions induced in unreplicated chromosomes during G1 of the cell cycle, indicating that G1-initiated lesions threaten genome stability more than G2-initiated lesions.