A Systems-Level Analysis of an Epithelial to Mesenchymal Transition 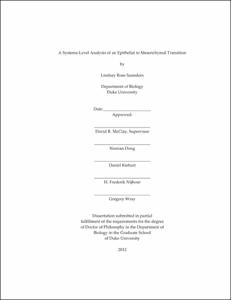 Embryonic development occurs with precisely timed morphogenetic cell movements directed by complex gene regulation. In this orchestrated series of events, some epithelial cells undergo extensive changes to become free moving mesenchymal cells. The transformation resulting in an epithelial cell becoming mesenchymal is called an epithelial to mesenchymal transition (EMT), a dramatic cell biological change that occurs throughout development, tissue repair, and disease. Extensive <italic>in vitro</italic> research has identified many EMT regulators. However, most <italic>in vitro</italic> studies often reduce the complicated phenotypic change to a binary choice between successful and failed EMT. Research utilizing models has generally been limited to a single aspect of EMT without considering the total transformation. Fully understanding EMT requires experiments that perturb the system via multiple channels and observe several individual components from the series of cellular changes, which together make a successful EMT.

In this study, we have taken a novel approach to understand how the sea urchin embryo coordinates an EMT. We use systems level methods to describe the dynamics of EMT by directly observing phenotypic changes created by shifting transcriptional network states over the course of primary mesenchyme cell (PMC) ingression, a classic example of developmental EMT. We systematically knocked down each transcription factor in the sea urchin's PMC gene regulatory network (GRN). In the first assay, one fluorescently labeled knockdown PMC precursor was transplanted onto an unperturbed host embryo and we observed the resulting phenotype <italic>in vivo</italic> from before ingression until two hours post ingression using time-lapse fluorescent microscopy. Movies were projected for computational analyses of several phenotypic changes relevant to EMT: apical constriction, apical basal polarity, motility, and de-adhesion.

A separate assay scored each transcription factor for its requirement in basement membrane invasion during EMT. Again, each transcription factor was knocked down one by one and embryos were immuno-stained for laminin, a major component of basement membrane, and scored on the presence or absence of a laminin hole at the presumptive entry site of ingression.

The measured results of both assays were subjected to rigorous unsupervised data analyses: principal component analysis, emergent self-organizing map data mining, and hierarchical clustering. This analytical approach objectively compared the various phenotypes that resulted from each knockdown. In most cases, perturbation of any one transcription factor resulted in a unique phenotype that shared characteristics with its upstream regulators and downstream targets. For example, Erg is a known regulator of both Hex and FoxN2/3 and all three shared a motility phenotype; additionally, Hex and Erg both regulated apical constriction but Hex additionally affected invasion and FoxN2/3 was the lone regulator of cell polarity. Measured phenotypic changes in conjunction with known GRN relationships were used to construct five unique subcircuits of the GRN that described how dynamic regulatory network states control five individual components of EMT: apical constriction, apical basal polarity, motility, de-adhesion, and invasion. The five subcircuits were built on top of the GRN and integrated existing fate specification control with the morphogenetic EMT control.

Early in the EMT study, we discovered one PMC gene, Erg, was alternatively spliced. We identified 22 splice variants of Erg that are expressed during ingression. Our Erg knockdown targeted the 5'UTR, present in all spliceoforms; therefore, the knockdown uniformly perturbed all native Erg transcripts (&#8721;Erg). Specific function was demonstrated for the two most abundant spliceoforms, Erg-0 and Erg-4, by knockdown of &#8721;Erg and mRNA rescue with a single spliceoform; the mRNA expression constructs contained no 5'UTR and were not affected by the knockdown. Different molecular phenotypes were observed, and both spliceoforms targeted Tbr, Tel, and FoxO, only Erg-0 targeted FoxN2/3 and only Erg-4 targeted Hex. Neither targeted Tgif, which was regulated by &#8721;Erg knockdown sans rescue. Our results suggest the embryo employs a minimum of three unique roles in the GRN for alternative splicing of Erg.

Overall, these experiments increase the completeness and descriptive power of the GRN with two additional levels of complexity. We uncovered five sub-circuits of EMT control, which integrated into the GRN provide a novel view of how a complex morphogenetic movement is controlled by the embryo. We also described a new functional role for alternative splicing in the GRN where the transcriptional targets for two splice variants of Erg are unique subsets of the total set of &#8721;Erg targets.