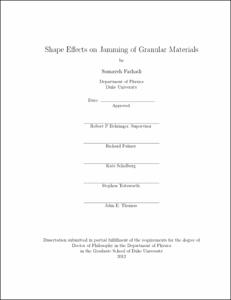 In this work, we have focused on the jamming properties of systems composed of semi-2D elliptical shaped particles. In order to study these systems, we have performed three types of experiments: Couette shear, biaxial isotropic compression, and biaxial pure shear. In each experimental scheme, we take data for both systems of ellipses an bi-disperse disks, in order to probe the effect of broken spherical symmetry at the particle scale, on the global behavior. We use two synchronized cameras to capture the flow of particles and the local stress at the same time.

In Couette experiments, we study the rheological properties, as well as the stress fluctuations for very large strains (up to 20 revolutions of the inner wheel). The system is sheared for densities below the isotropic jamming point (point J). From these studies we learn that over a small range of packing fractions, ($0.85 \leq \phi \leq 0.86$),

systems of ellipses demonstrate exceptionally slow dynamical evolution when they are sheared. For

fixed density, and starting from an essentially unstressed state, the application of shear strain leads to

first a growth of average particle displacements in the system through a Reynolds dilatancy effect,

and then for very large strains, a steady decrease in particle displacements. In an intermediate

range of shear strains, the system exists in effectively meta-stable states for a very long time

before relaxing to an unjammed state, in which the flow of particles stops completely, and the

stress fluctuations drop to zero. The strain scale for this relaxation depends on the global packing

fraction. We characterize this slow dynamics by measuring the evolution of mean velocity, density,

and orientational order throughout the experiments. In a similar set of experiments performed on

disks, slow relaxation was observed as well. However, the increasing average displacement build-up

before relaxation, which was observed in ellipses, did not occur for disks. This suggests that the

slow changes in their orientations, which then allow a more efficient packing.

In order to study the stress fluctuations, we implement photoelastic properties of the particles. We are able to track the $g^{2}$ (a measure of local stress) of each particle throughout the entire experiment.

Unlike disks, the power spectra of $g^2$, $P(\omega)$, is not rate invariant for ellipses. In other words, all curves of $R P(\omega)$ vs. $\omega / R$ (where $R$ is the shear rate) with different values of $R$, collapse to a single curve for disks, but not for ellipses.

The rate invariance of spectra was previously studied for sheared spherical glass beads and semi-2D pentagonal particles. This is the first experimental work in which the fluctuations of granular systems composed of elongated particles is addressed.

Cyclic isotropic compression is performed on semi-2D systems of bi-disperse disks and identical ellipses with aspect ratio 2, which are composed of photoelastic particles. In each compression cycle, the system is compressed with a total strain of $1.6\%$ and then expanded to the initial state. After completion of each half cycle, the system is allowed to relax, then imaged by two synchronized cameras. The packing fraction, $\phi$, of compressed states are chosen above the isotopic jamming point (point J). In both systems of disks and ellipses, we observed relaxation of global stress over long compression cycles. We find that the global stress drops with a power law over time ($\sigma \sim C t^{-A}$). The exponent of decay, $A$, drops linearly with increasing $\phi$, and hits zero at $\phi \simeq 0.89$ for disks, and $\phi \simeq 0.93$ for ellipses. Above these packing fractions, the system is stable with respect to its global stress.

In order to understand the origin of this slow stress dilation, we have studied the structural changes of the system, including Falk-Langer measures of affine and non-affine deformations, as well as average contact per particle.