Modernism after Nietzsche: Art, Ethics, and the Forms of the Everyday 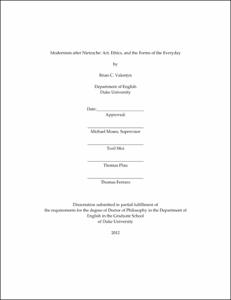 This dissertation uses Nietzsche's writings on truth and metaphor as a lens through which to reconsider the contribution that modernist art sought to make to both the understanding and, ultimately, the reconstruction of everyday life. It begins with a consideration of the sentiment, first articulated on a wide scale by the artists and philosophers of the romantic era, that something essential to the cohesion of individual and social experience has been lost during the turbulent transition to modernity. By situating Nietzsche's thought vis-à-vis the decline of nineteenth-century idealism in both its Continental and Victorian forms, I demonstrate how his principal texts brought to an advanced stage of philosophical expression a set of distinctly post-romantic concerns about the role of mind and language in the construction of reality that would soon come to define the practice of modernism in philosophy and the arts. Nietzsche's contribution to moral philosophy is typically regarded as a skeptical, and even wholly negative, one. Yet a central element of his thought is obscured, I argue, when we fail to account for its positive conviction that "higher moralities are, or ought to be, possible." Because his philosophy attempts to diagnose "genealogically" the concrete social, historical, and psychological conditions under which truth-relations are generated and maintained within a given cultural framework, it is in fact every bit as constructive as it is deconstructive, involving a sustained and ethically significant reflection on the character of normativity itself.

This initial confrontation with Nietzsche's philosophy sets the stage for the studies of individual artists--the American poets Ezra Pound and Wallace Stevens, as well as the Swedish filmmaker Ingmar Bergman--for whom these traditionally epistemological concerns about the nature of representation also shade naturally into the domain of ethics. In these chapters, I demonstrate how aesthetic modernism produces a range of sophisticated responses to the predicament of relativism that Nietzsche articulated while reaching sometimes radically different conclusions than Nietzsche about the nature and extent of human agency in the modern world. This enables us to see how modernism makes an essential contribution to what the philosopher Charles Taylor has characterized as the broader cultural effort to "overcome epistemology" by exploring the structures of intentionality and fostering in us a basic "awareness about the limits and conditions of our knowing"--a project to which modernist art and philosophy both make essential contributions.