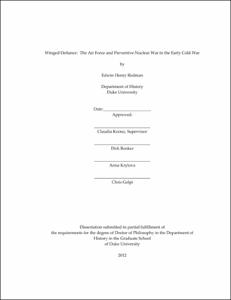 This dissertation examines a continuum of insubordination in the Air Force during the early Cold War. After World War II, a coterie of top generals in the Air Force embraced a view held by a minority in American government and the public, which believed that the United States should conduct a preventive war against the Soviet Union before it could develop its own nuclear arsenal. This strategy contradicted the stated national security policies of President Harry S. Truman and his successor, President Dwight D. Eisenhower. This influential circle of Air Force leaders undermined presidential policy by drafting preventive war plans, pushing preventive war strategies on civilian leaders in the executive branch, and indoctrinating senior field grade officers at the Air War College in preventive war thinking and strategies.

The preventive war episode in the Air Force demonstrates an extreme example of how the military bureaucracy regulates and undermines the Constitutional authority of the president to govern national security policy. That this behavior is normal implies that active steps must be taken to ensure proper civilian control over the military. I argue that three prominent theories of civil-military relations--Samuel Huntington's objective control, Morris Janowitz's constabulary theory, and Peter Feaver's agency theory--are notable contributions to U.S. civil-military relations; however, none of these approaches could have solved the breakdown in civil-military relations that prompted the preventive war activity in the Air Force. My concept for civilian control over the military mirrors modern preventive medicine, and assumes that the military is "at risk" for undermining presidential policy. "Preventive control" empowers civilian authorities to actively monitor the military for evidence of insubordinate behavior, and to establish liberal military education programs in order help all airmen to understand and accept political limits on the use of force.