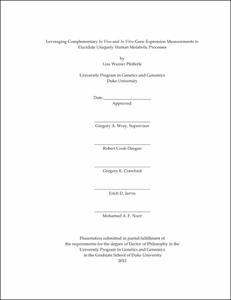 The origin of man has motivated researchers to investigate differences between humans and our non-human relatives. The striking phenotypic differences that distinguish humans from chimpanzees are likely controlled by a relatively modest number of genetic changes present between these species. As energy acquisition and processing effect multiple organ systems, the dramatic changes in the human diet are thought to underpin many of these unique phenotypes. The evolution of the human diet is marked by omnivory with increased consumption of animal products, cereal grain and vegetable oil associated with the Paleolithic era, domestication of plants and the industrial revolution respectively. Nutrition is essential for life and is unique as it both shapes, and is shaped by the genome. Given this complex interaction, teasing out actors and responders in the genome-diet relationship is a challenge. I took several expression approaches by interrogating regulatory regions, candidate networks and genomes in tissues of dietary relevance. These experiments uncovered combinations of physiological and morphological changes between humans and non-human primates. Taken together, the combined power of <italic>in vitro</italic> and <italic>in vivo</italic> approaches elucidates several genetic mechanisms important in uniquely human bioenergetic processes.