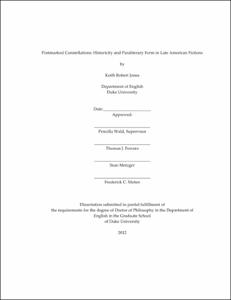 "Postmarked Constellations" examines how three late-twentieth century American writers bring long historical processes into view through their use of paraliterary forms. The term paraliterary is used in this study to refer to a set of popular cultural forms that overlap the field of the "literary," thereby complicating the latter's assumed autonomy from the impurities of everyday life. Focusing upon the historical fictions of Gayl Jones's blues novel Corregidora (1975), Samuel R. Delany's sword and sorcery series Return to Nevèrÿon (1979-1987), Cormac McCarthy's Western novel Blood Meridian, or the Evening Redness in the West (1985), this dissertation argues that these writers strategically turn to the paraliterary in order to engage their own moment's historical crisis within a larger trajectory of Anglo-European Western expansionism within the Americas. In adopting the blues (Gayl Jones), sword and sorcery (Delany), and the Western (McCarthy), these writers do not merely incorporate elements of these cultural forms, but rather transform their codes and conventions in order to bring past historical experiences into contact with the present. In so doing these writers draw out the historical dimensions internal to each of these generic forms. They show the degree to which genres are embedded within a larger world system, one that cannot be reduced to a national cultural imaginary, but must be placed within a longer-unfolding geopolitical context of colonial modernity, the Atlantic slave trade, the dispossession of indigenous peoples, and the emergence of a world market.

While written between the years 1975-1987, the texts of this study explore the deeper historical traumas specific to nineteenth-century U.S. expansionism. In turning to these specific histories--either in directly formal ways, as in McCarthy's Western or in the much broader terms of their legacies, as in Jones's blues novel or Delany's sword and sorcery series--these texts reveal the often obscured continuities between nineteenth-century and late-twentieth century forms of American empire. The chapters of this dissertation underscore how the blues, sword and sorcery, and the Western are tied to popular cultural forms that emerge, if not directly out of a nineteenth-century U.S. imperial literary and mass entertainment culture, then out of the historical experiences upon which such mass cultural phenomena was based. But these texts also complicate such ties to an imperial cultural imaginary by actively transforming the narrative logic of their generic forms. Tracing out the paraliterary dimensions of these texts thus allows us to constellate the historical past that their narratives examine with the late-twentieth century historical present in which they appear. In a period characterized by liberation movements and large-scale revolts both at home and abroad, these texts respond both to specifically national situations as well as to unfinished world historical processes. In this respect, these are American fictions concerned less with their quintessential Americanness--a preoccupation of both nineteenth- and early-twentieth century writers and critics--than with their peculiar relation to the world as Americans. "Postmarked Constellations" therefore proposes a method for tracking, not just a new engagement with the historicity of cultural forms within late-American fictions, but also for understanding the response of American writers to a radically new experience of globalization.