Georges Sorel, Autonomy and Violence in the Third Republic 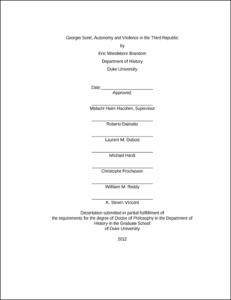 How did Georges Sorel's philosophy of violence emerge from the moderate, reformist, and liberal philosophy of the French Third Republic? This dissertation answers the question through a contextual intellectual history of Sorel's writings from the 1880s until 1908. Drawing on a variety of archives and printed sources, this dissertation situates Sorel in terms of the intellectual field of the early Third Republic. I locate the roots of Sorel's problematic at once in a broadly European late 19th century philosophy of science and in the liberal values and the political culture of the French 1870s. Sorel's engagement with Karl Marx, but also Émile Durkheim, Giambattista Vico, and other social theorists, is traced in order to explain why, despite his Marxism, Sorel confronted the twin fin-de-siècle crises of the Dreyfus Affair and Revisionism as a political liberal. I show how his syndicalism became radical, scissionistic, and anti-Statist in the post-Dreyfus context of anticlericalism leading up to the separation of Church and State in 1905. Sorel drew on figures such as Alexis de Tocqueville and Benedetto Croce to elaborate his Reflections on Violence in 1906-1908, finally transforming his political theory of institutions into an ethics of myth and individual engagement.

Sorel has been best known as an icon of radicalism as such--in shorthand, an inspiration for both Lenin and Mussolini. This political polarization has occluded Sorel's profound engagement with the foundational thinkers of the Third Republic. Against the backdrop of a systematic misunderstanding of the philosophical issues at stake, Sorel's political ideas and interventions have also been misunderstood. Not only his insights about the limits and potentials of the intellectual framework of the French Third Republic, but also their most significant contemporary resonances, have been lost. I show how and why this has been so by studying the reception of Sorel's work in the Anglophone world from the immediate postwar years until the early 1970s. Finally, I investigate resonances between Sorel's work as I have reconstructed it, and some currents in contemporary post-Marxist political thought.

Sorel is a revelatory figure in the entangled history of late 19th century liberalism and republicanism. He was profoundly engaged in the intellectual life of the French Third Republic and this, as much as his Marxism although less overtly, has shaped the meaning of his work. To return him to this context gives us a new understanding of the stakes of the philosophy of the period and the limits of its liberalism.