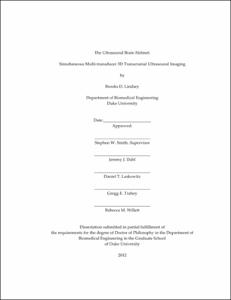 In this work, I examine the problem of rapid imaging of stroke and present ultrasound-based approaches for addressing it. Specifically, this dissertation discusses aberration and attenuation due to the skull as sources of image degradation and presents a prototype system for simultaneous 3D bilateral imaging via both temporal acoustic windows. This system uses custom sparse array transducers built on flexible multilayer circuits that can be positioned for simultaneous imaging via both temporal acoustic windows, allowing for registration and fusion of multiple real-time 3D scans of cerebral vasculature. I examine hardware considerations for new matrix arrays--transducer design and interconnects--in this application. Specifically, it is proposed that signal-to-noise ratio (SNR) may be increased by reducing the length of probe cables. This claim is evaluated as part of the presented system through simulation, experimental data, and in vivo imaging. Ultimately, gains in SNR of 7 dB are realized by replacing a standard probe cable with a much shorter flex interconnect; higher gains may be possible using ribbon-based probe cables. In vivo images are presented depicting cerebral arteries with and without the use of microbubble contrast agent that have been registered and fused using a search algorithm which maximizes normalized cross-correlation.

The scanning geometry of a brain helmet-type system is also utilized to allow each matrix array to serve as a correction source for the opposing array. Aberration is estimated using cross-correlation of RF channel signals followed by least mean squares solution of the resulting overdetermined system. Delay maps are updated and real-time 3D scanning resumes. A first attempt is made at using multiple arrival time maps to correct multiple unique aberrators within a single transcranial imaging volume, i.e. several isoplanatic patches. This adaptive imaging technique, which uses steered unfocused waves transmitted by the opposing or "beacon" array, updates the transmit and receive delays of 5 isoplanatic patches within a 64°×64° volume. In phantom experiments, color flow voxels above a common threshold have increased by an average of 92% while color flow variance decreased by an average of 10%. This approach has been applied to both temporal acoustic windows of two human subjects, yielding increases in echo brightness in 5 isoplanatic patches with a mean value of 24.3 ± 9.1%, suggesting such a technique may be beneficial in the future for improving image quality in non-invasive 3D color flow imaging of cerebrovascular disease including stroke.

Acoustic window failure and the possibility of overcoming it using a low frequency, large aperture array are also examined. In performing transcranial ultrasound examinations, 8-29% of patients in a general population may present with window failure, in which it is not possible to acquire clinically useful sonographic information through the temporal acoustic window. The incidence of window failure is higher in the elderly and in populations of African descent, making window failure an important concern for stroke imaging through the intact skull. To this end, I describe the technical considerations, design, and fabrication of low-frequency (1.2 MHz), large aperture (25.3 mm) sparse matrix array transducers for 3D imaging in the event of window failure. These transducers are integrated into the existing system for real-time 3D bilateral transcranial imaging and color flow imaging capabilities at 1.2 MHz are directly compared with arrays operating at 1.8 MHz in a flow phantom with approximately 47 dB/cm0.8/MHz0.8 attenuators. In vivo contrast-enhanced imaging allowed visualization of the arteries of the Circle of Willis in 5 of 5 subjects and 8 of 10 sides of the head despite probe placement outside of the acoustic window. Results suggest that the decrease from approximately 2 to 1 MHz for 3D transcranial ultrasound may be sufficient to allow acquisition of useful images either in individuals with poor windows or outside of the temporal acoustic window by untrained operators in the field.