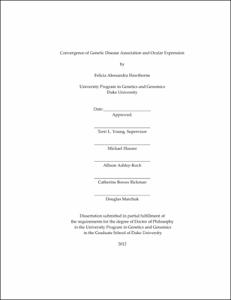 The visual system in humans provides the ability to interpret our surroundings from many distances. This complex system serves as a powerful sense which can drastically impact the quality of life when threatened or eliminated. While the mechanisms involved in visual interpretation are largely understood, many of the mechanisms of ocular diseases remain elusive. The most common ocular disorders are refractive errors, where failure of normal growth processes results in eye components with shape and sizes that are not matched to provide uncorrected sharp visual acuity without correction. Myopia, or nearsightedness, is a refractive error with prevalence rates of epidemic proportions in some urban Asian settings, and rising in other developed countries. Pathological, or high myopia, has an increased risk for potentially blinding ocular morbidities which can be irreversible and further negatively impact quality of life. Myopia, like other common ocular disorders, results from a combination of environmental and genetic factors. Over 20 candidate genomic regions have been identified as involved in myopic development progression.

One such locus, <italic>MYP3</italic>, on chromosome 12q21-23 spans nearly 44 Mb with more than 200 protein-encoding genes mapped within. Sizable candidate disease genomic regions typically require refinement to identify genes or variants within them which may contribute to disease development. Without an understanding of the underlying mechanistic framework of a disease, as is the case with myopia, biological inferences are difficult to make in prioritizing candidates, which can make finding true disease causing variants seem like finding a needle in a haystack. A better understanding of human ocular growth, as it relates to refractive error, may lead to more knowledgeable approaches to identifying the cause(s) of myopic development and associated ocular diseases.

To identify genes involved in ocular growth and development, whole genome expression patterns were assessed in human ocular tissues of fetal versus adult eyes, and adult posterior versus peripheral tissues. No database exists of fetal ocular tissue gene expression. In addition to providing insights into expression patterns during ocular development, these tissues were also compared as a surrogate to study rapid eye growth states such as in myopia. Only ocular tissue types with clinical phenotypes associated with myopic development were considered. Human retina/retinal pigment epithelium (RPE), choroid, sclera, cornea* and optic nerve* tissues were isolated from fetal (N=9; *N= 6) and adult (N=6) normal donor eyes. The Illumina® whole genome expression microarray platform was used to assess differential expression of genes. Fetal tissues were compared to their adult counterparts while adult posterior tissues were compared to their peripheral counterparts, and the differences in each were assessed using Ingenuity Pathway Analysis (IPA) for enriched functional groups and canonical pathways. Statistical significance for all tissue comparisons was determined using the Benjamin and Hochberg False Discovery Rate (FDR, 5%). Differentially expressed genes were compared to previously identified candidates for myopic development.

Ocular growth expression data were used to help prioritize the resulting association candidates as supporting evidence and was not used on its own to identify or exclude candidates. Candidate genes (within 100 kilobases (kb) of highly associated SNPs) identified through either qualitative or quantitative association testing were screened in the most disease relevant tissues (retina/ retinal pigment epithelium (RPE), choroid and sclera) for differential expression during ocular growth and by physical regions of the tissues within the eye. Genes that were identified by microarray studies as being differentially expressed in one or more tissue were validated using quantitative real time PCR (RT-qPCR).

Significant gene expression changes with fold changes > 1.5 were found in adult versus fetal retina/RPE (N=1185), choroid (N=6446), sclera (N=1349), and cornea (N=3872), but not the optic nerve nor any of the central versus peripheral tissues. In all adult versus fetal tissues, differentially expressed genes belonging to cancer, development, and cell death/growth functional groups, as well as signaling canonical pathways were enriched. Seventeen genes previously associated with increased susceptibility for non-syndromic high myopia were in the most significant functional assignments for at least one adult versus fetal ocular tissue. In adult central versus peripheral tissues, there was considerably more variation by tissue in enriched functions and canonical pathways of differentially expressed genes. The only functional category shared by all three tissue types was development.

As with screening genes previously implicated in myopic development, qualitative and quantitative association candidates were screened in the independent whole genome expression array analyses, comparing normal rapidly growing fetal to normal grown adult ocular tissues. <italic>PTPRR</italic> and <italic>PPFIA2<italic>, candidates from qualitative and quantitative association respectively, were both validated by RT-qPCR with differential expression in at least one disease relevant ocular tissue. <italic>PTPRR</italic> and <italic>PPFIA2<italic> belong to the same gene family- that of protein tyrosine phosphatase (PTP) genes. This family of genes relays extracellular signals that regulate cell growth, division, maturation and function, and its differential expression is consistent with our myopia surrogate model.

Many genes implicated in either syndromic or non-syndromic myopia were present in the most significantly enriched adult versus fetal functional and/or canonical pathways together. The adult versus fetal choroid and cornea tissue types had the most overlap with known non-syndromic myopic-associated genes in the most significantly enriched functional groups. Further exploration of the connections amongst these known genes may elucidate possible mechanistic roles for disease progression and/or reveal related novel candidate genes. Differentially expressed genes in central versus peripheral tissues yielded minimal overlap with genes implicated in myopia; however, in addition to broadening our understanding of the spatial variances in these tissues they may contain clues to the development and/or progression of other ocular diseases such as retinopathy of prematurity development.

The overlap with previously identified myopia-associated genes supports the model of eye growth for studying myopic development in human tissues. This expression data can be used both in prioritizing candidate genes other proposed genomic myopia loci, and also in detailed pathway analyses to identify potential biological mechanisms for candidates within these loci. Our most strongly associated candidate gene both in the discovery and replicate cohort was <italic>UHRF1BP1L</italic>, which was not differentially expressed in our data; however, interacting genes regulate the expression of at least one differentially expressed gene, indicating a possibly pathway connection. It is possible that differential expression may have been missed by the microarray data, or it may not be differentially expressed and affects myopic development through alternative or indirect means. While the expression data is a useful tool in prioritizing and inferring mechanistic roles for candidates, it cannot be used to exclude candidates. Deeper study of the pathways of candidate genes for myopic development may reveal connections to genes involved in ocular growth. Despite these potential limitations, two of the three novel candidates, <italic>PTPRR</italic> and <italic>PPFIA2</italic>, were supported by genomic convergence with the expression data, in addition to our discovery genetic association data. The other novel candidate, <italic>UHRF1BP1L</italic>, was validated in an independent Caucasian high-grade myopia cohort. Further validation and refinement of these three novel <italic>MYP3<italic> candidate genes is necessary to make further claims about their possible involvement in myopic progression.