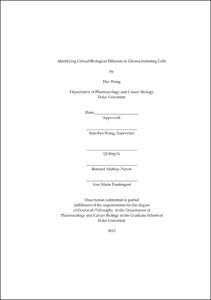 Glioblastoma (GBM) represents the most common and lethal brain tumor in adults, with glioma initiating cells (GICs) implicated to play a critical role in its progression and recurrence. However, the molecular mechanisms underlying the distinct function of GICs and non-GICs remain largely unknown. Elucidating distinct molecular features of GICs will pave the foundation for GIC directed therapies for GBM treatment.

MicroRNAs (miRNAs) are a class of non-coding small RNA molecules which negatively regulate gene expression and are deregulated in many types of cancer. Through a candidate-based screen, we identified microRNA-33a as a master determinant whose expression controls the functional differences between GIC and non-GICs. Antagonizing miR-33a function in GICs led to reduced self-renewal and tumor progression in immune-compromised mice, whereas overexpression of miR-33a in non-GICs rendered them to display features associated with GICs. Mechanistically, miR-33a acts to confer the biological property of GICs via enhancing the activities of cAMP/PKA pathway and Notch signaling by targeting negative regulators of these two pathways. Together these findings reveal a miR-33a-centered signaling network that dictates the identity/activity of GICs and consequently serves as a therapeutic target for the treatment of GBM.

In summary, this doctoral thesis reveals two novel molecular events that characterize the distinct feature of GICs and develops preclinical strategies for the therapeutic application of GBM.