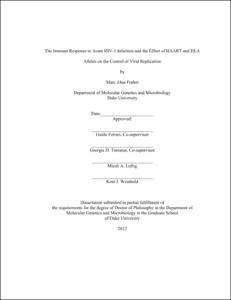 A fraction of HIV-1 patients are able to successfully control the virus and avoid developing AIDS. It has become increasingly clear that variations in the immune response during the initial days of acute infection including the period of peak viral replication determine long term differences in disease outcomes. While the precise factor(s) necessary and sufficient for protection from AIDS is as yet unidentified, a number of factors have been correlated with protection from AIDS. Among these are the presence of a strong proliferative and multifunctional T-cell response as well as the HLA allele status of a patient. Therefore the goal of this thesis project was to 1) broadly identify the major contributors to the proliferative and multifunctional T-cell response during acute infection with HIV, 2) examine the durability of these responses and 3) elucidate the gene regulation pathway(s) by which HLA allele status determines disease outcomes.

In order to identify the major contributors to the proliferative and multifunctional T-cell response to HIV we utilized PBMC samples from a cohort of acutely infected HIV patients in the Duke and University of North Carolina infectious disease clinics. These samples were stimulated in vitro with peptides representing the HIV clade B consensus sequence and the T-cells were analyzed for proliferation and multifunctionality. Through this analysis we identified CD4+CD8+ (DP) T-cells as overrepresented within the proliferative response and the primary contributor to multifunctionality. Additionally, the acute multifunctional T-cell response was highly focused on the Nef, Rev, Tat, VPR and VPU sections of the HIV proteome. We also discovered similar response patterns among a cohort of HIV controllers recruited from the Duke infectious disease clinic. In fact, the frequency of multifunctional DP T-cells was inversely correlated with viral loads among the controller cohort.

Finally, we examined the effect HLA alleles have on gene regulation during the initial interactions between HIV and the host immune system. This work employed 2 HIV negative patient cohorts. One cohort expressed HLA-B*35 which has previously been shown to correlate with rapid progression to AIDS following infection with HIV. The second cohort expressed HLA-B*57 which has been associated with long term non-progression following infection with HIV. PBMCs from each group were infected with HIV in vitro. Twenty-four hours after infection these cells were sorted into CD4+ T-cells, CD8+ T-cells and NK-cells. Following cell sorting, mRNA was isolated and interrogated for expression changes using whole genome microarrays. This analysis revealed HLA allele specific differences in the magnitude by which CD4+ T-cells, CD8+ T-cells and NK-cells activate the interferon response pathway following exposure to HIV.

In total, these findings provide insight into the cell types responsible for significant portions of the acute immune response to HIV and the mechanisms by which individuals protected from progression to AIDS differ from their peers.