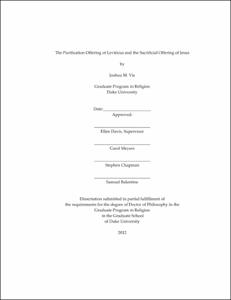 The life, death, resurrection, and ascension of Jesus are not often read against the backdrop of the sacrificial system of Leviticus, despite the fact that the Letter to the Hebrews and other New Testament texts do exactly this. Until recently, Hebrew Bible scholars had little insight into the function of many of the sacrifices of Leviticus. However, over the last thirty years, Jacob Milgrom has articulated the purgative function of the purification offering of Leviticus, the principal sacrifice offered for wrongdoing. The blood of the purification offering, which contains the animal's ,<italic>nefesh</italic>, best understood as the animating force of the animal, acts as a ritual cleanser. Milgrom has insisted that the purification offering only cleanses the sanctuary, never the offerer. This conclusion likely has kept many New Testament scholars from seeing the impact this sacrifice had on various New Testament authors. Thus although Milgrom's work has had a profound impact on Hebrew Bible scholarship, it has had little effect on New Testament scholarship on the sacrifice of Jesus.

The Letter to the Hebrews, along with other New Testament texts, articulates the same process and results for the sacrificial offering of Jesus. The emphasis in Hebrews and elsewhere in the New Testament is on the power (typically the cleansing power) of Jesus' blood. Jesus' death is necessary but insufficient. Hebrews clearly asserts that it was through the offering of Jesus' blood in the heavenly sanctuary that the heavenly things were cleansed, and more importantly, that believers were cleansed. Hebrews also articulates a two-stage process for the transformation of believers. In the first stage, believers are cleansed by Jesus' sacrificial offering in heaven. However, believers anticipate a final rest after Jesus' return when their flesh will be transformed as Jesus' flesh was after his resurrection. This transformation allows believers to dwell in harmony with and in proximity to God. The logic of the purification offering of Leviticus, then, informs the Letter to the Hebrews and other New Testament texts.