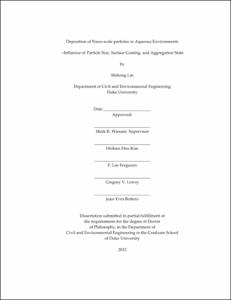 This work considers the transport and attachment of nanoscale particles to surfaces and the associated phenomena that dictate particle-surface interactions. A consideration of the deposition of nano-scale particles on surfaces is a natural outgrowth of more than a century of research in the area of colloid science, and has taken on new pertinence in the context of understanding the fate and transport of engineered nanoparticles in aqueous environments. More specifically, the goal of this work is to better understand the effects of particle size, surface polymer coatings, and aggregation state on the kinetics of nanoparticle deposition. Theoretical tools such as those developed by Derjaguin-Landau-Verwey-Overbeek (DLVO) and Flory-Krigbaum , as well as the soft particle theory and surface element integration scaling methods are employed to address certain problems that were not considered with the existing theoretical frameworks for the conventional colloidal problems. Consequences of theoretical predictions are evaluated experimentally using column experiments or the quartz crystal microbalance techniques to monitor deposition kinetics. One of the key findings of this work is the observation that polymer coatings may stabilize nanoparticles against deposition or increase deposition, depending on whether the polymer coatings exist on both of the interacting surfaces and the interaction between the polymer and the collector surface. Both steric and bridging mechanisms are possible depending on whether contact between the polymer and collector surface can result in successful attachment. In addition, limitations in the use of conventional, equilibrium-based DLVO theory to describe the deposition of nano-scale particles at very low ionic strength are also identified and discussed. Moreover, it is demonstrated that the interaction between the aggregated nano-scale particles and environmental surfaces is controlled by the characteristic size of the primary particles rather than that of the aggregates. Thus despite an increase in hydrodynamic diameter, aggregation is predicted to reduce deposition only from the hydrodynamic aspects, but not from the colloidal interaction aspect. The affinity between aggregated nanoparticles and a surface may be increased at the initial stage of deposition while being unaffected by aggregation state during later stages of deposition. The results of this study lead to better understandings, at least on a qualitative level, of the factors that controlling the kinetics of deposition and, in a broader sense, the fate and transport of nanoscale particles in the aqueous environment.