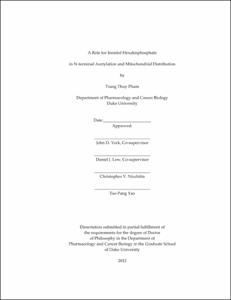 Inositol phosphates (IPs) are versatile metabolites that play important roles in multiple cellular processes. They have been considered signaling messengers that relay extracellular signals via a wave of their production and allosteric regulation of downstream targets. In addition to this classical role, recent studies have revealed that certain IPs can also function as protein structural cofactors. However, except for the two plant hormone receptors TIR1 and COI1, these IP binding proteins have neither sequences nor functions in common. Therefore, to test whether other cellular proteins are also subjected to this type of regulation and whether an IP binding motif exists, more proteins that bind IPs in a similar manner need to be identified. Via a proteome-wide biochemical screen, two yeast proteins were found to contain IP6 as an integral component. One is the N-terminal acetyltransferase A complex (NatA), and the other one is Tif31 (or Clu1). IP6 binding was also observed in NatC, another N-terminal acetyltransferase. The bioinformatics analysis and mutagenesis study showed that tandem tetratricopeptide repeats (TPRs), the only common structural element of NatA and Tif31, were responsible for coordinating IP6. This mechanism of IP<sub>6<sub> binding is conserved in the fly homologs of these proteins.

NatA is one of the enzymes that acetylate the &alpha;-amino groups at protein N-termini. This widespread protein modification affects a wide range of cellular processes. IP6 was shown to be essential for yeast NatA <italic>in vitro</italic> thermostability and for some but not all functions of the protein in cells grown under temperature stress. Other multiple phosphate-containing molecules including IP5 species and the bacterial alarmone ppGpp were found to bind NatA and partially compensate for the lack of IP6. IP6 also binds the human NatA homolog. This binding is crucial for hNatA complex formation, <italic>in vitro</italic> and <italic>in vivo</italic> activities, and ability to rescue NatA-deficient phenotypes when it is expressed in yeast. Therefore, IP6 acts as a molecular glue that brings hNatA (and hNatE) subunits together. The other protein found in our screen, Tif31, is important for normal mitochondrial morphology and distribution. In cells that cannot produce IP4, IP5 and IP6, Tif31 levels were significantly decreased and these cells exhibited severe mitochondrial aggregation. Tif31 mutants that cannot bind IP6 showed a reduction in cellular levels, a shift to high molecular weight complexes or aggregates, and inability to rescue <italic>tif31</italic>&delta; mitochondrial phenotype. This study established the vital role of IP6 and IP5 in maintaining Tif31 stability and Tif31-mediated regulation of mitochondrial distribution.

Collectively, this dissertation discovered two proteins that use IP6 as a structural cofactor. For the first time, a conserved IP6 binding motif has been shown to be present in certain TPR-containing proteins. Via tight binding to these proteins, IP6 stabilizes their structures or subunit interaction. This research provides mechanistic evidence for the interplay between IP biology and N-terminal acetylation as well as between IP biology and mitochondrial morphology.