Revisiting Sexual Selection: An Exaggerated Signal of Fertility in the Amboseli Baboons 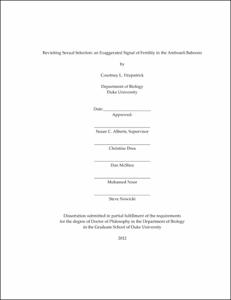 Sexual selection has long been accepted as a widespread force of evolution shaping male traits across taxa. In recent years, biologists have begun to investigate the extent to which sexual selection may also shape traits among females. However, current models of sexual selection have largely been developed using assumptions that--while generally met in males--often do not apply to females. Thus, attempts to apply these contemporary models to the study of sexual selection in females reveal weaknesses in the theoretical framework for sexual selection research. One consequence of this for empirical research is that researchers often infer the action of sexual selection upon evidence of male mate choice. Although male mate choice is increasingly common, it is much less likely to exert selection pressure than its female counterpart. I begin by proposing a conceptual framework that explicitly accounts for ...Next, I investigate a female trait that has recently become an iconic example of sexual selection in females; that is the exaggerated estrous swellings of cercopithecine primates. By combining morphological data collected with a non-invasive photographic method and observational behavioral data with longitudinal ecological and demographic data from the ongoing Amboseli Baboon Research Project, I examine the sources of variance in this exaggerated signal of fertility. Finally, I test the hypothesis that male baboons prefer females with larger sexual swellings because those females have higher fitness. I find no evidence to support this hypothesis. Instead, my results suggest that mate choice among male baboons has evolved to detect, not the intrinsic quality of the female as has typically been proposed, but the quality of a reproductive opportunity.