Genomic Analysis of Pathway Signaling in Glioblastoma and Other Cancers 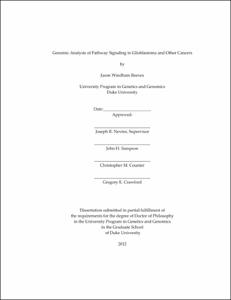 The disease process giving rise to cancer involves the consecutive accumulation of genetic or genomic alterations impacting the normal regulation of cellular functions. In cases of hereditary cancers, this process may be stepwise, with a shared initiating lesion leading to common subsequent alterations. However, in many non-hereditary forms of cancer the initiating and subsequent alterations giving rise to the tumor can vary substantially from individual to individual, and multiple molecularly distinct subsets of the disease can exist within histopathologically similar tumors. This molecular heterogeneity between patients hinders the ability to identify which alterations are responsible for tumor development and subsequent maintenance, and confounds the ability to effectively treat patients as response to a particular therapeutic intervention may be highly dependent on the molecular composition of the disease.

To further our understanding of the molecular alterations associated with tumorigenesis, we analyzed aggressive brain cancer, glioblastoma (GBM), samples for which multiple types of genome-wide information was available. We utilized a series of in vitro or clinically derived gene expression signatures by comparing gene expression of samples based on whether a particular cellular signaling pathway was known to be active or inactive. Using these signatures for cellular signaling deregulation, we examined the association between various genomic alterations and the relative activity of each pathway, identifying alterations that were enriched within patients that harbored similar profiles of pathway activation. These analyses lead to the identification of numerous previously uncharacterized alterations in GBM, including the identification of a ubiquitin-like gene, UBL3, that was associated not only with pathway signaling, but was also associated with poor patient outcome, as well as response of GBM xenograft models to treatment with standard of care therapeutic agents.

Further, given that the challenges involved in analyzing clinical samples include development methods for timely analysis of genomic data, we have described a framework to utilize these genomic signatures in a prospective setting by incorporating a non-overlapping reference dataset of similar tumor samples. This methodology allows the examination of pathway signaling, as captured by the signature, to be run in real-time when only a single patient sample is analyzed, and has a high degree of fidelity to the results generated from retrospective analysis across multiple tumor types. Together these studies have provided a novel framework for identification of significant genomic alterations that impact pathway signaling, as well as moving providing the mechanisms to analyze genomic signatures in a robust manner that accounts for the challenges associated with the prospective clinical setting.