Why Does Risk-Taking Peak During Adolescence?: Contribution of Neurochemical and Circuit-Level Function to Lower Serotonin-Mediated Behavioral Inhibition in Adolescents 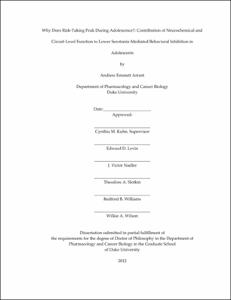 Adolescence is the period of transition between childhood and adulthood, and is characterized across mammalian species by changes in behavior that include increases in risk taking, novelty/sensation seeking, and social behavior. Immaturity of the central serotonergic system during adolescence could contribute to risk taking behavior by resulting in lower avoidance of aversive stimuli in adolescents than adults. The purpose of this dissertation was to investigate whether immature serotonergic function could contribute to adolescent risk taking. We studied pre- and postsynaptic serotonergic function and circuit-level mechanisms relevant to risk taking behavior using behavioral and neurochemical approaches.

Serotonergic modulation of behavior was assessed in adult (67-74 day old) and adolescent (28-34 day old) male rats in the novelty induced hypophagia (NIH), elevated plus maze, (EPM), and light/dark (LD) tests for anxiety-like behavior. Serotonin depletion with the synthesis inhibitor p-chlorophenylalanine (PCPA) produced anxiolytic effects only in adult rats in the NIH test and in both age groups in the EPM. These data showed that some serotonin-mediated behavioral inhibition is present during adolescence. However, adolescent rats were less sensitive than adults to the anxiogenic effects of the serotonin releasing drugs fenfluramine and methylenedioxymethamphetamine (MDMA) and the serotonin uptake inhibitor fluoxetine in the LD test, suggesting that serotonin is not as effective at inhibiting behavior in adolescents as it is in adults.

Since presynaptic serotonin function did not explain age differences in the anxiogenic effects of indirect serotonin agonists, we investigated postsynaptic serotonin signaling by testing the behavioral effects of serotonin receptor agonists in the LD test. Adolescent rats were less sensitive than adults to the anxiogenic effects of the 5-HT1A agonist 8-hydroxy-2-(dipropylamino)tetralin (8-OH DPAT) in the LD test, but not to the 5-HT2 agonist meta-chlorophenylpiperazine (mCPP). No age differences were observed in <super>3</super>H-8-OH DPAT binding in prefrontal cortex, amygdala, or hippocampus between adolescents and adults, and infusion of 8-OH DPAT into mPFC (prelimbic cortex), ventral hippocampus, or basolateral amygdala was unable to replicate the systemic effects of 8-OH DPAT. These data suggest that lower adolescent sensitivity to the anxiogenic effects of 8-OH DPAT is not due to age differences in receptor expression, and show that 5-HT1A stimulation in mPFC, ventral hippocampus, and basolateral amygdala alone is not sufficient to mimic the effects of systemic 8-OH DPAT.

We tested the circuit-level effects of fluoxetine and 8-OH DPAT, since stimulating 5-HT1A receptors in single brain regions failed to reproduce age differences in systemic 8-OH DPAT administration. Both drugs activated regions of the amygdala more in adults than adolescents, and 8-OH DPAT also produced greater prefrontal cortical activation in adults. Fluoxetine produced greater expression of the immediate early gene c-Fos in regions of the extended amygdala in adult rats, and 8-OH DPAT produced greater activation of the lateral orbital cortex and central amygdala in adult rats. Lower activation of cortical and amygdala brain regions could underlie the lower behavioral effects of these drugs in adolescents, as these brain regions are important in mediating behavioral inhibition and anxiety-like behavior. These data are also consistent with human studies showing immature cortical and amygdala function during adolescence.

This dissertation shows that adolescents are less sensitive than adults to serotonin mediated behavioral inhibition, and that this may be due to immature activation of neural circuits modulated by the 5-HT1A receptor between the prefrontal cortex and amygdala. This immature serotonin mediated behavioral inhibition could contribute to adolescent risk taking, drug abuse, and increased risk for suicidality during SSRI therapy for depression and mood disorders.