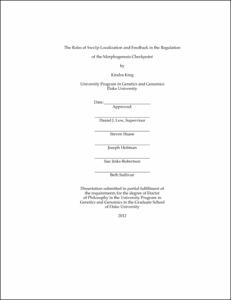 Saccharomyces cerevisiae cells exposed to a variety of physiological stresses transiently delay bud emergence or bud growth. To maintain coordination between bud formation and the cell cycle in such circumstances, the morphogenesis checkpoint delays nuclear division via the mitosis-inhibitory Wee1-family kinase, Swe1p. Swe1p is degraded during G2 in unstressed cells, but is stabilized and accumulates following stress. Degradation of Swe1p is preceded by its recruitment to the septin scaffold at the mother-bud neck, mediated by the Swe1p-binding protein Hsl7p. Following osmotic shock or actin depolymerization, Swe1p is stabilized, and previous studies suggested that this was because Hsl7p was no longer recruited to the septin scaffold following stress. However, we now show that Hsl7p is in fact recruited to the septin scaffold in stressed cells. Using a CDK mutant that is immune to checkpoint-mediated inhibition, we show that Swe1p stabilization following stress is an indirect effect of CDK inhibition. These findings demonstrate the physiological importance of a positive feedback loop in which Swe1p activity inhibits the CDK, which then ceases to target Swe1p for degradation. They also highlight the difficulty in disentangling direct checkpoint pathways from the effects of positive feedback loops active at the G2/M transition.