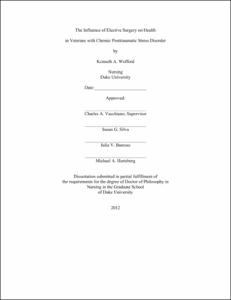 Posttraumatic stress disorder (PTSD) is common, chronic, and associated with greater risk of postoperative mortality in veterans. Therefore, the purpose of this dissertation was to determine if elective outpatient surgery had a persistent and deleterious effect on the physical or mental health of veterans, and also to explore factors that contributed to postoperative health change in this population. A longitudinal, mixed method, quasi-experimental, nonequivalent control group study was conducted. Physical and mental health, depressive symptom severity, posttraumatic symptom severity, and pain severity were measured in 29 veterans with PTSD before undergoing outpatient elective surgery, one week after surgery, one month after surgery, and three months after surgery. For comparison, parallel data were collected from a control group of 31 veterans with PTSD at enrollment, one week after enrollment, one month after enrollment, and three months after enrollment. Subjects who displayed clinically significant or distressing changes in health status after surgery were interviewed to identify factors associated with postoperative health change. Subjects in the surgical group reported significant declines in subjective physical and mental health at one week, but not one or three months after outpatient elective surgery. Depressive symptoms severity and posttraumatic symptom severity were unchanged after surgery by surgery. Subjects reported that this physical and mental distress was driven by acute postoperative pain, but that underlying chronic pain remained influential throughout their postoperative course.