People and Identities in Nessana 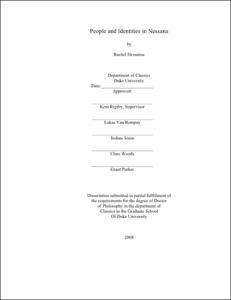 View / Download
1.4 Mb
Date
Author
Stroumsa, Rachel
Advisor
Rigsby, Kent
Repository Usage Stats
673
views
3,836
downloads
Abstract
Abstract In this dissertation I draw on the Nessana papyri corpus and relevant comparable material (including papyri from Petra and Aphrodito and inscriptions from the region) to argue that ethnic, linguistic and imperial identities were not significant for the self-definition of the residents of Nessana in particular, and Palaestina Tertia in general, in the sixth- to the seventh- centuries AD. In contrast, this dissertation argues that economic considerations and local identities played an important role in people's perceptions of themselves and in the delineations of different social groups. The first chapter, is intended to provide a basis for further discussion by setting out the known networks of class and economics. The second chapter begins the examination of ethnicity, which is continued in the third chapter; but the second chapter concentrates on external definitions applied to the people of Nessana, and in particular on the difference between the attitude of the Byzantine Empire to the village and the attitude of the Umayyad Empire. Building on this ground, the third chapter tackles the issue of ethnicity to determine if it was at all operative in Nessana, determining that though ethnonyms were applied in various cases, these served more as markers of outsiders and were situational. Chapter four moves to the question of language use and linguistic identity, examining the linguistic divisions within the papyri. An examination of the evidence for Arabic interference within the Greek leads to the conclusion that Arabic was the vernacular, and that Greek was used both before and after the Muslim conquest for its connotations of power and imperial rule rather than as a marker of self identity. The conclusions reached in this chapter reprise the discussion of imperial identity and the questions of centralization first raised in chapter two. This return to previous threads continues in chapter five, which deals with the ties between Nessana and neighboring communities and local identities. The chapter concludes that the local village identity was indeed very strong and possibly the most relevant and frequently used form of self-identification. Overall, it appears that many of the categories we use in the modern world are not relevant in Nessana, and that in those cases where they are used, the usage implies something slightly different.
Type
Dissertation
Department
Classical Studies
Subject
History, Ancient
Language, Ancient
Literature, Classical
Nessana
Negev
identity
ethnicity
multilingualism
bilingualism
Permalink
https://hdl.handle.net/10161/619
Citation
Stroumsa, Rachel (2008). People and Identities in Nessana. Dissertation, Duke University. Retrieved from https://hdl.handle.net/10161/619.
Collections
More Info
Show full item record