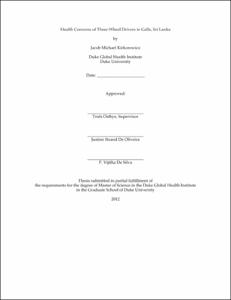 Little is known about the general health concerns of three-wheel drivers, who provide an important transport service through many South Asian nations, including Sri Lanka. In order to fill this gap in the literature, a two-stage qualitative study was employed to determine the types of health concerns that three-wheel drivers in Galle, Sri Lanka experience. The first stage employed one-on-one semi-structured interviews relating to personal health with 20 three-wheel drivers. The second stage consisted of two semi-structured focus groups, one with five participants and the other with eight. The most common health concern among three-wheel drivers at this site was musculoskeletal pain in the back, shoulders, and knees. The most common health risk factors were alcohol consumption, tobacco use, lack of physical activity, and poor utilization of routine examinations. An unexpected finding was the relative lack of road traffic accidents and injuries. Based on these findings, government or private health initiatives aimed at three-wheel drivers might seek to intervene on modifiable risk factors such as substance use and failure to seek well care. Health officials might also encourage three-wheel manufacturers to re-think their design to reduce musculoskeletal stress. The information collected was used to design a survey instrument, which will be used in future research to quantify three-wheel driver health concerns on a larger scale in Sri Lanka.