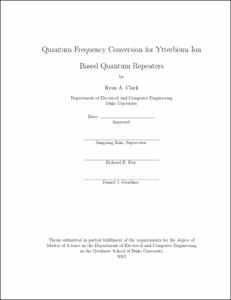 Quantum key distribution systems represent a proven method to obtain fundamentally secure communication channels. However, the loss of entangled photons which create the encryption key limit the distance over which the systems are useful. Quantum repeaters have been used to increase the distance over which entangled photons can be transmitted. The most successful quantum repeaters entangle information between trapped ions and single photons and through the use of entanglement swapping protocols, relay the encryption keys over large distances. A requirement of these quantum repeaters is the ability to work in the telecom wavelengths (1310 nm or 1550 nm), where standard silica fibers exhibit low loss. With the majority of ions emitting in the ultraviolet and visible spectrum, and ytterbium in particular emitting at 369.5 nm, a conversion process is then needed that can translate the photons from 369.5 nm to the telecom band while preserving the entangled state. The experiment presented here details the first stage of a nonlinear frequency conversion setup that uses strong pump light to enable the conversion of 369.5 nm photons to 708 nm. The efficiency of the conversion process is analyzed to determine the optimum system parameters, with an initial single pass conversion efficiency of 0.20% achieved. Noise introduced during the nonlinear conversion process is examined to determine the effect it presents on the communication channel.