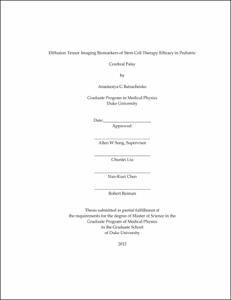 Cerebral palsy (CP) is a non-progressive sensory-motor disorder and is one of the most costly and debilitating chronic pediatric conditions, affecting 2-3 out of 1000 children in the United States. To better understand the underlying mechanisms that result in the devastating motor deficits in CP patients, quantitative assessment of brain regions and connectivity with respect to the severity of injury is critical. It is generally known that motor control can be largely influenced by the integrity of the corticospinal tract (CST) connecting the primary motor cortex (pre-central gyrus) to the brainstem and the spinal cord. Thus, we further sought to establish CST volume as a sensitive and reliable biomarker that can reveal functional deficit in individual patients through comprehensive quantitative analyses in 29 consented human subjects (1-6 years of age, mean 2.67±1.36 years) diagnosed with hemiplegic, diplegic, or quadriplegic CP. The proportional reduction of bilateral CST volume with increased disease severity was observed for diplegic and quadriplegic patients (i.e. with bilateral motor deficits). Furthermore, CST volume with respect to disease severity in hemiplegic patients (i.e. with unilateral motor deficits) exhibited more complex patterns of asymmetry, revealing evidence for alternative neuromechanisms of motor control, such as compensation and neuronal plasticity by the unaffected hemisphere. In all cases, other diffusion metrics such as fractional anisotropy (FA) and mean diffusivity (MD) within the CST did not display significant correlation with disease severity. It is thus concluded that individual CST volume, accurately derived from DTI tractography, is one of the strongest non-invasive imaging biomarkers which could potentially help understand the differential causes for motor deficits and compensation in bilateral CP. It could also be further adopted to assess the underlying mechanism for functional recovery in individual patients undergoing cellular therapies. In addition to motor disability, numerous other neurodevelopmental differences are associated with CP and contribute greatly to the disease morbidity. Therefore, we further examined global changes in WM connectivity with respect to CP disease severity with a whole brain connectome analysis in a cohort of 18 pediatric patients with bilateral CP. As expected, reduction in overall and mutual connectivities throughout the motor regions, including the primary and supplemental motor areas, basal ganglia, and brainstem, was associated with the extent of primary motor disability. In addition, our results show diffuse and significant reduction in global inter-regional connectivity, measured as fiber volume, throughout the entire brain in relation to disease severity. This novel finding has not been previously reported in the CP literature and brings CP into line with multiple other pediatric neuropsychiatric disorders that are thought to involve network-level structural and/or functional disruptions early in development.