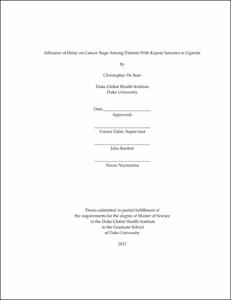 The incidence of Kaposi sarcoma (KS) has increased rapidly since the advent of the HIV epidemic. Although patient outcomes have improved significantly in high-income countries after the introduction of highly-active antiretroviral medication, incidence and mortality of KS still remain high in low-incomes countries. Delaying treatment may be a factor in explaining these poor outcomes, but there exists no empirical evidence measuring the association between delay and patient prognosis for KS patients. In response, a prospective, cross-sectional study was conducted at the Uganda Cancer Institute (UCI) among 161 HIV positive patients to measure the association between delay and overall stage risk from June-October 2012. Standardized interviews were conducted to measure delay and chart data were abstracted to obtain the cancer stage the patient received during their initial physician consultation upon admission to the UCI. Patients who experienced delay were over three and a half times as likely to have an overall poor stage risk than those who did not experience delay (OR: 3.59, P-value: 0.001, CI: 1.74-7.41). In multivariate analysis after controlling for gender, age, income, and exposure to HAART, patients who experienced delay were still three times as likely to have an overall poor diagnosis compared to those who did not delay (OR: 3.07, P-value: 0.002, CI: 1.35-6.96). Eliminating harmful delays can be an important factor to intervene upon to improve patient prognosis and outcomes among HIV-associated KS patients in Uganda.