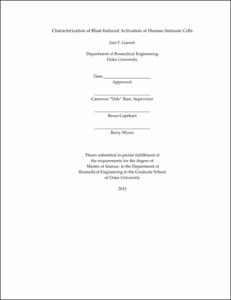 Blast related injuries have become a common occurrence among soldiers and civilians serving in Iraq and Afghanistan, and minor traumatic brain injuries associated with such incidents have increased correspondingly. Advances in protection and treatment have allowed many individuals to survive what would have previously been deadly blasts but there is a concern that there are additional negative side effects associated with such exposure. This study hypothesizes that human T leukocytes and promyelocytes respond to blasts by initiating cell death processes and releasing microparticles that could lead to further systemic inflammation. It was found that there was a significant (p<0.05) increase in lactase dehydrogenase activity and microparticle release in HL-60 cells blasted using a shock tube (with an incident blast overpressure of either 1000 or 1300 kPA and a duration of 2 ms) compared to control populations after 24 hours. There were no corresponding increases in Jurkat cells exposed to similar conditions.