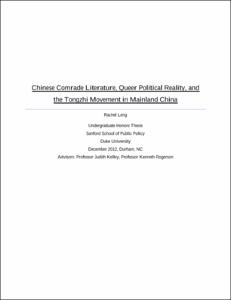 View / Download
2.8 Mb
Date
Author
Leng, Rachel
Repository Usage Stats
1,482
views
6,354
downloads
Abstract
This thesis explores the development of Mainland China’s online “Comrade Literature” (同志文学tongzhi wenxue), a body of fiction linked to the experiences of Chinese homosexuals that emerged in the late 1990s. The central question is: How has Chinese Comrade Literature responded to changes in political rhetoric and government policy affecting queer identity in modern China? This thesis looks at samples of online Comrade stories as they correspond to political developments in China from 1996 to 2006, with an eye to how these narratives problematize the struggles of a marginalized queer Chinese population. An investigation of implicit and explicit references to laws, policies, and government action in Comrade stories reveals how they establish solidarity by communicating messages about China’s repressive political and social environment for homosexuals. The analysis focuses on the fictional texts themselves – on what they tell us about China’s political reality and State control affecting the gay community and what imagery they provide that can be interpreted as social mobilization and political protest. This thesis argues that this emergent queer literary discourse constitutes much more than meets the eye. It is not simply an expression of an underground gay culture; it is a dynamic form of resistance to the particular social and government discrimination towards Chinese homosexuality and protest against the broader environment of political repression in China.
Description
Honors Thesis earning Highest Distinction in Public Policy Studies
Type
Honors thesis
Department
Public Policy Studies
Subject
Comrade Literature
Homosexuality
Sexual Rights
Chinese Gay Fiction
Tongzhi (Gay Rights) Movement
Mainland China
Permalink
https://hdl.handle.net/10161/6208
Citation
Leng, Rachel (2012). Chinese Comrade Literature, Queer Political Reality, and the Tongzhi Movement in Mainland China. Honors thesis, Duke University. Retrieved from https://hdl.handle.net/10161/6208.
Collections
More Info
Show full item record