HIV/AIDS-related institutional mistrust among multiethnic men who have sex with men: effects on HIV testing and risk behaviors. 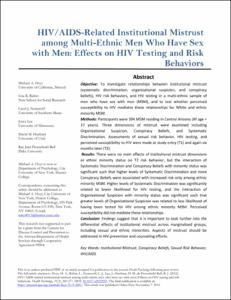 Research Professor of Global Health
Rae Jean Proeschold-Bell is interested in the interplay between mental and physical well-being and has designed and tested interventions that integrate care for people with obesity and depression; HIV/AIDS and substance use; and hepatitis C and alcohol use. Most recently, Rae Jean has been studying positive mental health as a way to prevent depression and promote caring for one's physical health. Her work currently focuses on caregivers, including clergy in North Carolina and ca