Natal emigration by both sexes in the La Pacifica population of mantled howlers: when do some stay? 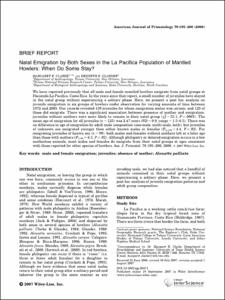 View / Download
98.7 Kb
Date
Authors
Clarke, Margaret R
Glander, Kenneth E
Repository Usage Stats
251
views
219
downloads
Abstract
We have reported previously that all male and female mantled howlers emigrate from natal groups at Hacienda La Pacifica, Costa Rica. In the years since that report, a small number of juveniles have stayed in the natal group without experiencing a solitary phase. Here, we present a post hoc analysis on juvenile emigration in six groups of howlers under observation for varying amounts of time between 1972 and 2005. Our records revealed 139 juveniles for whom emigration status was certain, and 125 of these did emigrate. There was a significant association between presence of mother and emigration: juveniles without mothers were more likely to remain in their natal group (chi(1)(2) = 53.1, P<.0001). The mean age of emigration for all juveniles (n = 125) was 2.47 years (SD = 0.9, range = 1.5-6.5). There was no difference in age of emigration by adult male composition (one-male, multi-male, both), but juveniles of unknown sex emigrated younger than either known males or females (F(2,116) = 4.4, P<.02). For emigrating juveniles of known sex (n = 99), both males and females without mothers left at a later age than those with mothers (F(1,95) = 6.5, P<.02). Although philopatry or delayed emigration occurs in a few motherless animals, most males and females do emigrate from their natal groups at ages consistent with those reported for other species of howlers.
Type
Journal article
Subject
Age Factors
Alouatta
Animal Migration
Animals
Costa Rica
Female
Male
Population Dynamics
Sex Factors
Permalink
https://hdl.handle.net/10161/6236
Published Version (Please cite this version)
10.1002/ajp.20473
Publication Info
Clarke, Margaret R; & Glander, Kenneth E (2008). Natal emigration by both sexes in the La Pacifica population of mantled howlers: when do some stay?. Am J Primatol, 70(2). pp. 195-200. 10.1002/ajp.20473. Retrieved from https://hdl.handle.net/10161/6236.
This is constructed from limited available data and may be imprecise. To cite this article, please review & use the official citation provided by the journal.
Collections
More Info
Show full item record